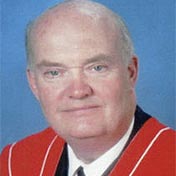 Professor Emeritus David Mackenzie Logan died peacefully at his home in Tottenham, Ont., on Tuesday Jan. 17. Professor Logan was in his 80th year.

Prof. Logan was an academic, having achieved his BA from the University of Toronto in 1960 and then his PhD in 1965 in Medical Biophysics at The Princess Margaret Hospital. He settled at York University in 1968 and worked there teaching one of the largest classes on campus until 2002. While his training was in science, his interests were varied to the point that he was asked to teach an American Civil War class based solely on his own research and tours of war era battlefields.

In addition to his academic work, Prof. Logan was an active and committed volunteer. He served as the chair of the North York School Board in 1974 and 1975, on the Board of Directors for the York Finch Hospital and the Board of Directors of the Ontario March of Dimes. All of these commitments lead to numerous awards, including the 1994 Canada Volunteer Award and the 2001 International Year of the Volunteer award among many others. Those who knew him best understood his commitments to volunteer organizations, but their true admiration came from knowing he was always there to help them or stop and share a conversation.

He leaves his wife Susan (nee Hanna), children Richard, Heather and Michael and their spouses, and his grandchildren, Cameron, Spencer and Frances.

Respecting Prof. Logan’s wishes, cremation has taken place and a private family gathering will be held at a later date.  In lieu of flowers, the family requests that donations in Prof. Logan’s memory be made to the Ontario March of Dimes.