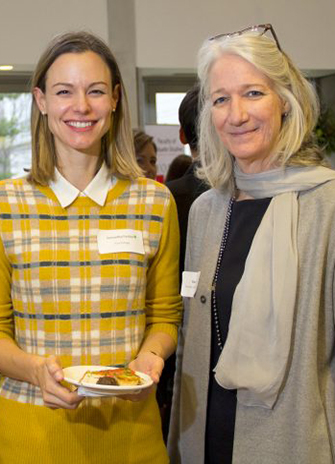 Close to 100 graduate students, postdoctoral fellows, faculty and staff gathered at the Faculty of Graduate Studies’ Scholars Reception on Dec. 6 to celebrate their tremendous achievements in provincial and national research funding competitions.

Between 2012 and 2016, York graduate students secured more than $39.9 million in major external awards to support their research. This success, coupled with approximately $77 million in internal York University awards, further highlights how graduate studies is contributing to raising the profile of the University.

Barbara Crow, dean and associate vice-president Graduate, welcomed all attendees, including the many faculty and staff members who provide guidance and support to students and their scholarship pursuits.

Crow also acknowledged Dec. 6 as the National Day of Remembrance and Action on Violence against Women in Canada, marking the anniversary of the murders in 1989 of 14 young women at l’École Polytechnique de Montréal. She said she was a fourth–year PhD student here at York when the tragedy occurred. She noted that in almost every province since the early 1990s, there has been a larger increase for females over males among full-time master’s and doctoral enrolments.

“I wanted to share this because I am very proud of the advances that have been made over the past 15 years of women pursing graduate education,” she said. “I hope today we can reflect on, and continue to raise awareness on, gender-based violence in our society.”

Also in attendance was Provost Rhonda Lenton, who joined in welcoming scholars and spoke at length on their contributions to the University’s reputation as a research-intensive institution. Celia Haig-Brown, associate vice-president Research, echoed those sentiments, noting that York’s graduate students and postdoctoral fellows are key drivers of the University’s research and scholarly success.

The research spectrum of York’s graduate population is vast, highlighted by the diversity of students present from York’s many graduate programs.

Jesse Thistle, PhD candidate in history and recipient of both the Trudeau and Vanier Canada Graduate Scholarships, spoke about his work tracing the history of Métis road allowances after 1885 across the prairies. He is the first graduate student at York to be awarded both a Trudeau and a Vanier scholarship, which are widely regarded as the most prestigious graduate scholarships in the country.

Dessi Zaharieva, PhD candidate in kinesiology and a Vanier scholar herself, highlighted her work examining various insulin strategies to maintain blood glucose concentrations in individuals with Type 1 diabetes. The findings of this research will help develop algorithms for an artificial pancreas system.

The Scholars Reception is an opportunity for graduate students and postdoctoral fellows to meet and celebrate with other researchers at York, along with faculty and staff who assist with scholarship applications and adjudications throughout the year.

The event is held annually in December.