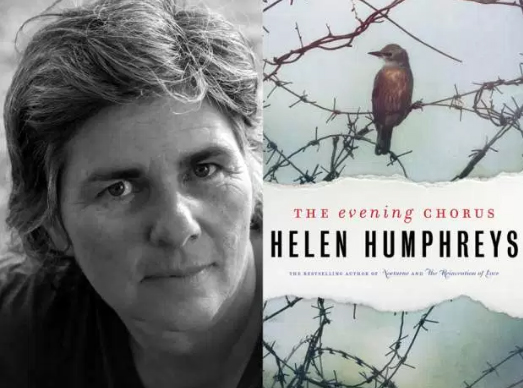 Canadian author and poet Helen Humphreys visited York as part of the Canadian Writers in Person program, to talk about her novel The Evening Chorus.

Humphreys visited York University on Nov. 15. She has written poetry, novels and creative non-fiction. Her first novel, Leaving Earth (1997), won the City of Toronto Book Award. Her second novel, Afterimage (2000), won the Rogers Writers’ Trust Fiction Prize and was nominated for the Commonwealth Writers’ Prize. Wild Dogs (2004) won the Lambda Prize for fiction, and Coventry (2008) was shortlisted for the Trillium Book Award and the Canadian Authors Association Award for Fiction. The Reinvention of Love (2011) was longlisted for the Dublin Literary Award and shortlisted for the Canadian Authors Association Award for Fiction. Her latest novel, The Evening Chorus (2015), was a finalist for a Governor General’s Literary Award.

The Evening Chorus focuses on James Hunter in the first section, an English officer who spends the Second World War in a POW camp in Germany. As a way to deal with life in the camp, he starts watching a pair of redstarts near the camp, keeping detailed notes, which he publishes as a book after the war. Meanwhile, his young wife, Rose, who lives in a small cottage in the English countryside, also experiences the effects of war and the freedom that becomes available to women in particular. His sister Enid’s apartment in London gets bombed, and this sends her on a journey of self-discovery while staying with Rose. The reader follows these characters throughout their efforts to survive pain, loss and uncertainty during the war and the ensuing years. Humphreys employs evocative descriptions of nature to transport the reader to the English countryside.

The initial idea for The Evening Chorus came to Humphreys in the form of an image of men in a cage while the birds are free outside of it. The writer told the Canadian Writers in Person audience that, at first, “it was going to be James’ story of making it through a POW camp, but then it expanded into the story of his wife and his sister, too.”

The role that nature plays in this novel is significant, as it reminds us all that we are a part of this larger world. “We intersect with the natural world in various ways,” said Humphreys. “The natural world offers the characters a kind of redemption out of the prisons they made for themselves.”

On Nov. 29, Allan Weiss offered a reading from Making the Rounds. On Jan. 17, 2017, author André Alexis will read from his book Fifteen Dogs.

Readings are free and open to any member of the public. For more information, contact Professor Leslie Sanders at leslie@yorku.ca or Professor Gail Vanstone at gailv@yorku.ca. All readings are held Tuesdays from 7 to 9pm in 206 Accolade West Building, Keele campus