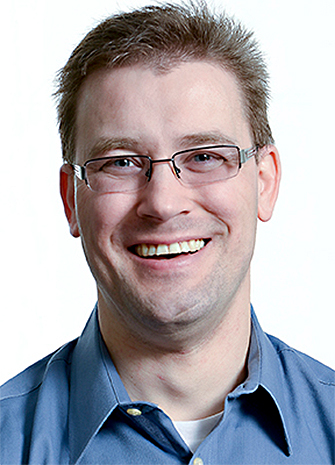 Appearing at regular intervals in YFile, Open Your Mind is a series of articles offering insight into the different ways York University professors, researchers and graduate students champion fresh ways of thinking in their research and teaching practice.  Their approach, grounded in a desire to seek the unexpected, is charting a new course for future generations.

Today, the spotlight is on Faculty of Science Chemistry Professor Gerald Audette. Audette’s research interests focus on protein crystallography, bionanotechnology, nanomedicine and structural biochemistry. He is the co-editor of two volumes of the Handbook of Clinical Nanomedicine (CRC Press, 2016) and is currently working on the third volume.

A. I am interested in understanding how bacteria assemble purpose-built nanoscale structures that are used for any number of cool things, such as sticking to surfaces, getting molecules in/out of the cell, infection, motility etc. These systems are broadly known as secretion systems, and we [my colleagues and I] are interested in two different systems for different reasons.

The first system we are looking at is one that is involved in the transfer of DNA between bacteria in a process known as horizontal gene transfer. We’re interested in determining the three-dimensional structures of the component proteins that assemble this particular secretion system in an effort to understand how it works, but also to understand how we might affect it so that we could possibly render it inactive, or even less active. This approach could help make the current arsenal of antibiotics more useful in the sense that bacteria would take longer to develop resistances to them. To do this, one needs both structural and functional information of the target systems to get a handle on what is going on at the molecular level.

The second system is a structure that is assembled by a secretion system, a structure known as a pilus. We found a version of a particular pilus subunit that can assemble into pilus-like structures without the bacterial assembly system; in effect, we generated protein nanotubes.  We’re interested in understanding how these protein nanotubes assemble from the subunits, as well as thinking about what we might do with them once we have them.

A. These systems, to my mind, are nanotargets; they are at the nanometer scale, but are not “technology,” they are quite reasonably targets for drugs etc. And as they are biological in nature, they have a health impact – we have all heard about “superbugs” etc., but those super bugs use molecular and nanoscale structures to affect infection, drug resistance etc. This brought me to look at the field of nanomedicine; that is the use of nanoscale approaches in fighting disease, or the effect of nanoscale systems on human health (think asbestos or carbon nanotubes).

Q. How does your approach to the subject benefit the field?

A. Nanomedicine is a fairly broad field and an interdisciplinary one. You have of course medicine and pharma, but also diagnostics, environmental and regulatory issues, legal and business aspects. I’m a co-editor on the first two volumes of a new series covering this wide-ranging field of nanomedicine, two very weighty volumes that took a while to assemble and were published earlier this year. But in the end, despite the wide-ranging nature of the field of nanomedicine (and nanotechnology etc.), it comes back to having a detailed understanding of the systems involved, which brings me back to our research.

Q. Did you ever consider other fields of research?

A. Not really. I always liked biology and chemistry, and so biochemistry seemed a good fit. Then I got turned onto protein structure, and then crystallography and structural biochemistry, and the rest is as they say history. I suppose if I wasn’t doing to do this, I’d probably be doing archaeology. I like exploring old cities etc. and thought “Indiana Jones” was really cool when I was growing up.

A. I’m teaching Macromolecules of Biochemical Interest and X-ray Crystallography this term, which I have taught for a few years now, and I do like to be novel and bring interesting structures into both courses.

Q. What are you reading and/or watching right now?

A. My current reading list is heavy on immunology responses, biologicals, and nanomedicines due to the current volume of the series on nanomedicine that I’m working on as an editor. This is in addition to my usual e-stack of papers that keeps piling up as new research comes out.

On the non-research side of the table, I did recently read Strange Days by Ted Ferguson, which was a great read about Canada in the 1920s and The Innovators by Walter Isaacson, a book about the evolution of the digital age from Ada Lovelace to Wikipedia. A friend has also introduced me to Ian Banks and his “Culture” novels (a bit of science fiction), and I do like the work of Neal Stephenson, and Jack Whyte (I was a Tolkien junky growing up). And of course, The Game of Thrones (I like the television series, but the books are better). As for television, oddly enough, the only thing that I try to watch on a regular basis is the Formula One during the racing season on Sunday mornings. Other than that, it is really just whatever is on when I turn on the TV.

Q. What advice would you give to students thinking of pursuing a graduate degree or embarking on a research project for the first time?

A. I think I would have to say don’t just go for the “quick hit.” Be observant and willing to explore what the data tells you. Research takes time, and if you are too interested in the right now, you might miss something or make mistakes, which will only cause you to spend more time correcting them. Patience in research always pays off. Take the time to do it right. That’s not to say if something falls into place quickly that it is not worth it and it most certainly is and can be incredibly rewarding. But just because something doesn’t work the first time does not mean it won’t work. Often the not-so-low-hanging fruit is more interesting…challenging, yes, but also very interesting!

Q. If you could have dinner with any one person, dead or alive, who would you select and why?

A. The boring answer to that would be my family; most of our family lives out in Western Canada, so we don’t get to see each other all that often. But if I had to pick someone other than family, it would have to be Dorothy Crowfoot-Hodgkin. She was a pioneer in X-ray crystallography, she determined the structures of penicillin, vitamin B12 (for which she won the Nobel Prize in Chemistry) and insulin (35 years after she first crystallized it), among others. She was an incredible scientist and was influential at a critical time (the middle of the 20th century), both as a scientist and as a person.

A. Other than playing taxi-driver for all my son’s activities? I practice Kendo, a Japanese martial art based on the katana; in essence, Japanese fencing. I have been practicing kendo for close to 20 years, and currently hold the rank of Yondan, which is a fourth-degree black belt. I find it a great way to work up a sweat and force myself to think about something other than science; you can’t let the outside world intrude or you’ll miss things and your technique just goes wrong. What is really great is that my son, Aidan, has gotten into Kendo as well. It is great to spend time with him this way, and he gets to “hit” Dad and we tell him how to do it better!