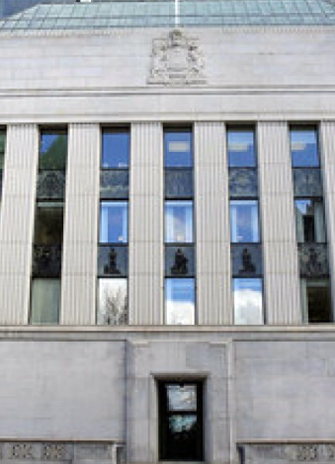 A group of York University students enrolled in the Economics Program in the Faculty of Liberal Arts & Professional Studies will learn firsthand what it is like to apply the theories they’ve learned in class to a real-life challenge posed by the Bank of Canada.

The student team will represent York University and compete in the Bank of Canada Governor’s Challenge on Friday, Nov. 18. They’ll put their best presentation skills to the test when they compete against teams from 15 other Canadian universities.

The experiential education challenge will see the students assess and analyze current and prospective macroeconomic conditions to formulate a recommended course of action for Canadian monetary policy to officials of Bank of Canada. They will take into consideration current and future risks and the outlook for inflation.

Serving on the York University team are:

Giancarlo Martino, a fourth-year economics student who is the team’s Canadian economy expert. In this role he will be in charge of the Canadian sector analysis; summarizing public and private sector information to help the team come up with a recommendation for the Canadian overnight interest rate.

Fatima Betty Niane
, a fifth-year economics student, is the U.S. economic factors expert. An international student from Senegal, Niane’s role is to analyze the US economy, its trends and forecasts.

Team member MD Abid Hossain is an international student from Bangladesh. A fourth-year economics student, he is the team’s global economic factors expert, specializing in the global economy and the macroeconomic drivers.

As the team’s econometric modelling expert, fourth-year economics student Amrou Nayal’s role is to forecast the future values of the variables and select the forecast models.

Javaria Hayat is the team’s backup presenter/econometric modelling expert. A fourth-year economics student, she will be using econometric models to forecast various parameters that impact the Canadian interest rate.

Jesse Wiebe is the Economics Students’ Association Liaison and the team manager. In this role, he coordinates the team’s work and ensures that practice sessions run smoothly.

Mohammad Rashwan is serving as the team’s researcher on the Canadian Economy specializing in different influences related to the local Canadian economy such as climate change and environmental economics, and macro-economic theory including fiscal and monetary policies

The group is supervised by George Georgopoulos, professor of economics and the graduate economics program director. Georgopoulos is the York Senior Fellow Scholar at Massey College, University of Toronto. In 2008 he was part of a team of economists from Canada and the European Union (EU) that worked on the exploratory stage of the Canada-EU free trade agreement.

The students have participated in a number of practice presentations made to different groups including current PhD students and faculty in the Economics Department.

The Governor’s Challenge is an annual university outreach program organized and sponsored by the Bank of Canada and designed to bring real-world economics into the undergraduate classroom. The challenge provides an outstanding experiential learning opportunity while also providing a chance to influence actual Bank of Canada policy.

Each of the participant universities will be assigned to a grouping containing up to six universities based on region, and all teams will compete on the same day. The winning team from each grouping will advance to the national round taking place in February 2017 at the Bank of Canada headquarters in Ottawa, Ontario. Stephen Poloz, governor of the Bank of Canada will present an award to the winning team.