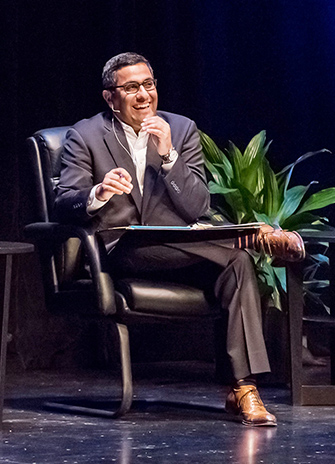 Appearing at regular intervals in YFile, Open Your Mind is a series of articles offering insight into the different ways York University professors, researchers and graduate students champion fresh ways of thinking in their research and teaching practice.  Their approach, grounded in a desire to seek the unexpected, is charting a new course for future generations.

A. I study the modern business corporation and the law that surrounds it. Over the last few years, I have been thinking through the law, culture, and practices that shape corporate behavior, which has led me to focus on issues of corporate governance. In particular, I‘ve turned my attention to the relationship between corporate governance and diversity.

For example, global statistics reveal that men dominate the upper echelons of the business world, including the corporate boardroom. Recently, a set of countries has attempted to address these gender disparities by resorting to the force of law. For some countries, this has meant passing quotas, which require set degrees of gender balance in boardrooms. In others, regulators have adopted the less aggressive approach of information disclosure where regulators ask corporations to publicly report on diversity-related practices in varying levels of detail. My recent book is an in-depth study of this turn to regulation.

A. In my previous work, I explored the intersections of transnational business activity with human rights norms. In doing so, I participated in a number of policy reform initiatives at the United Nations, national, and provincial levels. As I participated in these multi-stakeholder expert consultations, I was struck by the socio-demographic homogeneity of the corporate managers in attendance – in particular, vis-à-vis race and gender.

A. My book is the first major empirical study of the two main approaches that regulators around the world have adopted to address boardroom diversity: gender quotas and diversity disclosure rules.

We know little about the day-to-day operation of corporate quotas. To fill this void in our knowledge, I conducted in-depth interviews with Norwegian corporate directors, men and women, about their experiences under Norway’s controversial law – the very first quota enacted. In the United States, the Securities and Exchange Commission (SEC) requires corporations to report on whether they consider “diversity” in identifying directors and, if so, how. The SEC, however, didn’t define “diversity” in its rule, leaving it to companies to give the term meaning. So what does “diversity” mean to corporate America? I analyzed four years of S&P 100 disclosures to shed light on this question.

A. I bring together two seemingly divergent discourses that rarely interact with one another: corporate law and diversity/anti-discrimination. Typically, scholars do not use qualitative inquiry in corporate law and corporate governance research. But, in my view, that needs to change. Interview-based research, which draws from personal identity narratives, can play a vital role in unearthing important dynamics in the operation of the corporation – dynamics that we wouldn’t otherwise see and understand.

Q. What findings have surprised and excited you? (i.e. tell us about the most interesting finding, person and/or place you encountered while pursuing your research.)

A. Quotas are very controversial. When Germany enacted a boardroom quota in 2015, it provoked decidedly negative reactions by critics who argued that quotas have negative repercussions both for individual directors and for firms more broadly. So, I was struck by the fact that most of the corporate directors I interviewed support the Norwegian law.

These directors frequently spoke to how their views had evolved. Many said that they were initially against the quota. It was only after seeing the law in action and directly experiencing its effects that they eventually came to endorse it. Why? In their view, the resulting heterogeneity has enhanced the quality of boardroom deliberations and overall corporate governance. This resonates with other studies documenting that diverse groups tend to do a better job than homogeneous ones of tackling complex issues. And, frankly, a number of directors came to the realization that diversification wouldn’t happen organically. Legal intervention was necessary for meaningful change, given the dynamics of in-group favoritism and closed social networks that thwart diversity, as well as the important power dynamics at stake. As one director told me, “If… a new category of society shall be given power, someone will have to give away that power…. And that is not an easy thing to do”.

These findings are important. Of course quotas are a blunt, imperfect instrument. But commentators who impugn them rarely root their concerns in the experiences of those who presumably matter the most – the directors who actually live under quota regimes.

On the disclosure side, I was admittedly surprised that only about half of the U.S. companies that I studied defined diversity to include socio-demographic characteristics such as gender or race. Instead, most firms construed diversity to entail diversity of background or experience.

A. Getting access to corporate directors for research interviews can be difficult. They are busy people who frequently deal with sensitive issues, and if you’re an outsider to their social and economic networks they may be hesitant to meet with you and to speak candidly about difficult topics like diversity, discrimination, and power relations.

To get in the door, I first prevailed upon professional contacts to facilitate introductions to a small, initial set of interview participants. I then utilized the referral technique known as snowball sampling to identify additional interviewees. So, after conducting each initial interview, I asked the participant if she or he would be willing to identify or reach out to a director colleague who might be interested in speaking with me. This approach takes a lot of patience and relationship-building and there are no guarantees. But when it works, it’s a particularly useful tool for studies where it’s challenging to access population members.

Q. How has this research opened your mind to new possibilities or new directions?

A. Much of the existing discussion on boardroom diversity frequently justifies the push toward diversification by advancing a business case, which centers on economic performance. In other words, the idea that heterogeneous boards will lead to more profitable, value-generating businesses. Also, all regulatory efforts to date focus exclusively on gender. Flowing from this, I see two directions for future inquiry.

First, the underlying basis for inclusion should be augmented with equity-based arguments. Qualified women and other underrepresented groups ought to be participants in corporate governance because the boardroom represents a core location of social and economic power – because we want to democratize power and equitably distribute access to opportunities. Second, future policy debates should incorporate a more holistic conception of diversity – a conception that includes socio-demographic factors such as race and ethnicity.

A. Absolutely. Boardroom diversification is an issue that cuts across numerous disciplines and I am constantly engaging with and relying on work outside of law. My initial literature review involved a mountain of books and articles from the fields of regulatory theory, political science, psychology, management, organizational behaviour, corporate governance, finance and feminist theory.

Q. How are you sharing your research with others?

A. I’ve disseminate my research findings by writing opinion pieces (one in The Atlantic, one in The Globe & Mail, and two in The Toronto Star); giving television, radio, and newspaper interviews; blogging; speaking at conferences and on academic and non-academic panels; participating in policy roundtables (such as those convened by the Ontario Securities Commission); and by having informal discussions with government agencies and civil society organizations.

I’m honoured that my research has been useful to those working in this space and is informing public policy discourse. In March, for example, ten democratic lawmakers cited my findings in a letter to the Chair of the SEC, urging her to take action on corporate board diversity. And in January, the U.S. Government Accountability Office (a respected agency of the U.S. Congress) cited my findings in a report prepared at the request of the ranking member of the U.S. House of Representatives Subcommittee on Capital Markets. The ranking member then urged the SEC to update its diversity disclosure requirements in a manner consistent with my recommendations.

Q. What advice would you give to students thinking of pursuing a graduate degree or embarking on a research project for the first time?

A. The economist Claudia Goldin has a wonderful piece where she likens doing academic work to being a detective. That’s a nice idea to have in your back pocket as you begin graduate studies or an initial research project – that as a researcher you’re searching for hidden truths and analyzing and theorizing them. And, of course, she notes that you’re only going to be fulfilled if the hidden truths that you’re trying to uncover relate to questions that you’re passionate about.

Q. What are you reading and/or watching right now?

A. I recently finished reading Discontent and Its Civilizations by Mohsin Hamid. It’s a collection of Hamid’s essays on a range of topics, from fatherhood to the war on terror. I’m now very excited to start reading Matthew Desmond’s Evicted: Poverty and Profit in the American City. This is an ethnographic study by a U.S. sociologist. It chronicles the experiences of a set of Milwaukee families who are living in poverty and go through the eviction process. By all accounts, it’s a deeply moving book.

A. I really enjoy live music. But honestly, I haven’t seen a show in ages. My wife and I have a two-year-old daughter named Nina, so our fun time is mainly spent doing child-related things. Parenthood has been an incredible experience. I’ve taken a particular liking to children’s literature. There’s a book called The Day the Crayons Quit that’s a little advanced for Nina, but I can’t wait to read it with her.  It’s about a young boy whose crayons go on strike. They each present him with a letter setting out their concerns. The colour red, for example, feels that she is overworked as compared to the other colours because she’s in such high demand – you know, having to colour apples, strawberries, fire trucks and the like. It’s pure gold. To be honest, I’d probably read this book over and over even without a child!