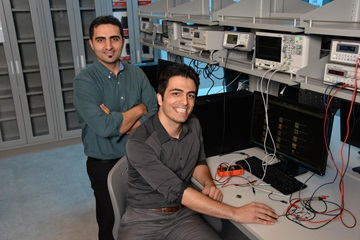 It’s estimated that one in every 100 Canadians suffers from epilepsy and roughly one in four experiences seizures that cannot be controlled with anti-epileptic drugs.

Lassonde School of Engineering Professor Hossein Kassiri is combining his technical expertise and entrepreneurship skills to develop a revolutionary device for early detection of seizures.

The coin-sized implantable device created by Kassiri monitors and detects unusual electrical activity within the brain that signals that a seizure is about to start. Kassiri’s device then stimulates the brain to change the electrical pattern, which in turn stops or reduces the severity of the seizure. The device is wireless and does not require a battery, has 64 channels and uses a sophisticated algorithm. Prior to the development of the device, such sophistication was only available by computer.

Kassiri’s device is revolutionary because unlike conventional technology, which sends out periodic pulses to the vagus nerve in the brain, the device actively monitors the brain’s electrical activity.

This exciting technology represents a movement for those with epilepsy away from hospital monitoring and towards more personalized methods of seizure management.

Kassiri and his business partner Nima Soltani founded a startup company Braincom Inc. to commercialize the device and move it to market.

Kassiri is an assistant professor at the Department of Electrical Engineering and Computer Science in the Lassonde School of Engineering at York University.