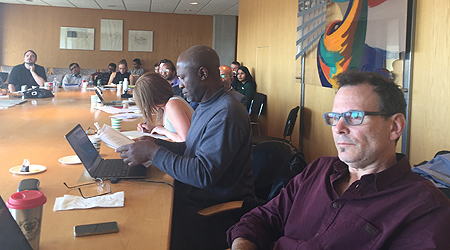 The symposium, “Found in Translation: Cosmopolitics and The Value of Biotech,” addressing themes of translation, value, biotechnology and cosmopolitanism, was held at York University, Nov. 3 to 5.

It brought together social scientists, biologists and venture capitalists from Canada, India, Japan, Vienna, the United States, Germany and Turkey to explore the nature of biotech change at the level of constitutional rights and in political structures of both individuals and collectives.

The symposium is part of a larger three-year Social Science and Humanities Research Council of Canada (SSHRC) Partnership Grant, “Cosmopolitanism and the Local in Science and Technology,” with principal investigators Professor Gordon McOuat of King’s College, York University Professors Anna M. Agathangelou and Bernard Lightman, and Sundar Sarukkai, professor of philosophy at the National Institute of Advanced Studies in Bangalore. Its goal is to establish a research network on the “cosmopolitanism” in science. To this end, it examines the types of negotiations that go into the making of science and its contingent practices within an increasingly globalized (cosmopolitan) landscape.

The featured speaker of the symposium, Sheila Jasanoff, the Pforzheimer Professor of Science and Technology Studies at the Harvard Kennedy School, was introduced by Faculty of Liberal Arts & Professional Studies Dean Ananya Mukherjee-Reed.

In her remarks, Jasanoff addressed how modern biotechnology makes value through metamorphoses of wholes into parts. She emphasized the importance of taking seriously technoscientific and legal conceptions of what it means to be a human. In their transformation, noted Professor Jasanoff, the human genome, the cell line, the DNA fingerprint, the in-vitro fertilized embryo, the stem cell, the chimera, the genetically modified organism and the bio-bank acquire value as they become new, or “they encourage and enable new forms of transactions.”

Jasanoff stressed that law mediates market decisions and affects value, especially “when the commodity in question is life itself.” Drawing on her coined notion of co-production (Jasanoff 2005), she suggested this stance allows us to read these metamorphoses by attending to the making of economic and normative value, while also revisiting questions of power, agency and authorization of rule in the age of globalization and biotechnology.

Professor Sanchev Sidhu of the University of Toronto also delivered a plenary talk titled, “Synthetic Protein Therapeutics and Global Society,” in which he addressed the translation of biology to the market and to various institutional and economic models. In his capacity as director of the Centre for Commercialization of Antibodies and Biologics, he spoke to the ways such centres generate value by “combining the innovation of academic research with the rigor of industrial process” and making possible the commercialization of antibodies, including the translation of academic research to therapeutics. Sidhu noted the creation of new platforms/centres that can “leverage private funding to systemize and accelerate the process of going from big data to transformative drugs.”

In the same vein, the director of MaRS Innovation, Fazila Seker spoke about the ways she has worked with different biotechnological laboratories to help them translate their “innovations” to the market. For her, “translating any proposed value creation vision relies on connecting the groups of people impacted by it and aligning their interests. Alignment cannot be achieved unless there are mechanisms in place for uncovering the underlying assumptions and beliefs of each of these groups of people and others around them.”

Other speakers addressed the pivotal questions raised by Agathangelou about political economy, including how the co-production of publics and bio-economies of research and innovation is made possible and how emerging sciences and biotechnologies are shaped by politics, global markets, law, and governance, and vice versa.

Kaushik Sundar Rajan of the University of Chicago, noted the emerging collaboration between the Translational Health Science and Technology Institute (THSTI), a biomedical research institute being set up as a collaboration between the Government of India’s Department of Biotechnology (DBT), and the Division of Health, Science and Technology (HST) at MIT, pointing to the changing nature of the research university in India in the life sciences. He explained how new forms of science and biotechnologies emerge together with bio-financialization, especially in the era of mergers and acquisitions.

LA&PS social sciences Professor Kean Birch addressed the relationship of capital, value and innovation.  Similarly, York University political Science Professor Rodney Loeppkey spoke about the political economy of biotechnology and the ethical implications of “translation” in the health sector from lab to market.

Several participants engaged with ways to expand ethical deliberations about the impacts of biotechnology to extend beyond their operators or beneficiaries by finding ways to solicit and consider the views of affected populations. York University political science Professor Robert Latham spoke about the importance of the politics of evasion in the times of the biotechnological. Professor Deboleena Roy of Emory University, talked about the relationship of science and ethics in the case of Bhopal, while Jessica Kolopenuk of the University of Victoria, focused on the creation of the DNA bank for indigenous peoples. In her view, this requires careful consideration because of the racialized and sexualized colonial power relations through which not only violence against indigenous women and girls (and peoples) has been constituted, but also through which the collection of DNA has become a specific response to such violence.

Jasanoff and Agathangelou concluded the conference with commentaries on strategies of how to move forward with this project. The symposium was organized by Agathangelou with the support of Gordon McOuat, Bernard Lightman, post-doctoral Fellow Jobin M. Kanjirakkat and York graduate students Kira McCutcheon, Cameron Murray and Brandi Estey-Burtt of Dalhousie University. It received support and funding from SSHRC, the Office of the Vice-President Academic & Provost at York University, LA&PS Associate Dean Research, Naomi Adelson, the York Centre for Asian Research, the Office of the Vice-President Research & Innovation, the Department of Political Science in LA&PS, the Faculty of Graduate Studies, the Department of Social Science (LA&PS), Department of Science and Technology Studies in the Faculty of Science, the York Centre for Feminist Research and Bethune College.