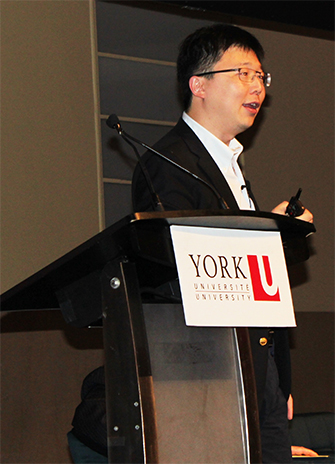 Featured image for Hacking the Genome

On the evening of Nov. 2, some 500 people came out for the second York Science Forum, a high-profile public engagement initiative of York’s Faculty of Science that explores the latest mysteries and discoveries in science.

The event, titled “Hacking the Genome: The Brave New World of Gene Editing,” featured a keynote address by bioengineer Feng Zhang from MIT, who recently co-developed a new gene editing technology called CRISPR-Cas9. Zhang received the Gairdner International Award this year for this work. Hacking the Genome was presented in partnership with the Gairdner Foundation.

“York Science Forum is a key part of our Faculty’s extensive efforts to engage with the broader community and to offer exciting programs that stimulate curiosity and imagination,” said Ray Jayawardhana, dean of science at York University. “We were delighted to focus on the fascinating science and the potentially far-reaching implications of genome editing, and to have one of the pioneers of the CRISPR technology headlining the event.”

The event opened with welcoming remarks from Jayawardhana, who then introduced the moderator for the evening, Paul Kennedy, host of CBC Radio’s Ideas. After a short introduction on the topic, Kennedy handed the stage over to Zhang to deliver a keynote.  Zhang took the audience on a journey from his early days of becoming a student and researcher, to the development of the CRISPR-Cas9 system and the many different applications and benefits the technology may potentially bring.

After his talk, Zhang was joined by Biology Professors Mark Bayfield and Ron Pearlman from the Faculty of Science for a panel discussion, during which the audience also had the opportunity to ask questions. After the formal program, dozens of audience members, mostly high school students and teachers, continued to engage informally with the scientists. Many found Zhang’s address inspirational, and treated him as ‘rock star scientist.’