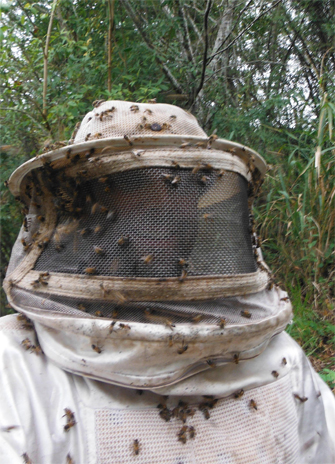 “Our study was the first step in understanding how a very invasive insect became so successful and the genetic basis of the unique traits of this bee,” says Harpur, who led the research with Samir Kadri, PhD student who visited the Zayed lab from UNESP in São Paulo, Brazil.

Africanized honeybees, which are often called “killer honeybees”are a hybrid strain of honeybees that was created by a genetic experiment gone wrong. In 1956, Apis mellifera scutellata was imported from Africa to breeding stations in Brazil, but escaped and hybridized with European honey bees in the region. The resulting hybrid Africanized honeybee became an incredibly successful biological invader. As of today, the bee has a range as far north as California. The species is extremely defensive and aggressive and has caused human fatalities. Its existence and range have caused immense economic damage to the honeybee industry.

The research team sequenced the genomes of 360 Africanized honeybees from 30 colonies, identifying more than three million mutations. The results were published in Scientific Data by the journal Nature.

With the genome sequenced and published, researchers can now explore the population dynamics, evolution and genetics of the Africanized honey bee. Scientists will soon be able to better understand the behaviours of the species and how it became so invasive.