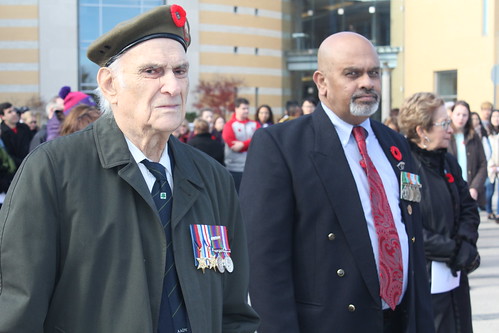 Hundreds of people gathered at the Harry W. Arthurs Common on Friday, Nov. 11, to remember the fallen and pay tribute to all those who have made sacrifices for our freedom.

Faculty, staff and students attended York University’s Remembrance Day Ceremony to mark the eleventh hour of the eleventh day of the eleventh month – the anniversary of the signing of the armistice, on Nov. 11, 1918, that ended the First World War.

The community came together to deliver a poignant ceremony, including the “Call of the Pipes” led by pipe major Ian K. MacDonald of the Toronto Police Pipe Band.

The ceremony continued with the signing of “O Canada” and a welcome message from Vice-President Advancement Jeff O’Hagan.

Traditional Wisdom Keeper Philip Cote performed the lighting of the ceremonial fire, offered remarks and sang an Indigenous song to commemorate the occasion.

Remarks were offered by President and Vice-Chancellor Mamdouh Shoukri and Lieutenant-Colonel John McEwen, CD (a York University alum), who shared thoughts on the different ways to mark and reflect on Remembrance Day – all of them equally significant.

“The Last Post” was played by Emilio Bernardo-Ciddio, York U student musician, followed by two minutes of silence after which MacDonald played “Lament” on the pipes and Bernardo-Ciddio played “Reveille/Rouse.”

The event continued with the ceremonial laying of the wreaths, and the singing of “God Save the Queen” by the York University Chamber Choir Quartet.

This year’s Remembrance Day ceremony concluded with the offering of tobacco into the ceremonial fire.

At 11am on Nov. 11, 1918, the guns on the Western Front fell silent after more than four years of continuous warfare.

Remembrance Day honours the men and women who were killed during the two world wars and other conflicts. Previously known as Armistice Day, it was renamed Remembrance Day after the Second World War.