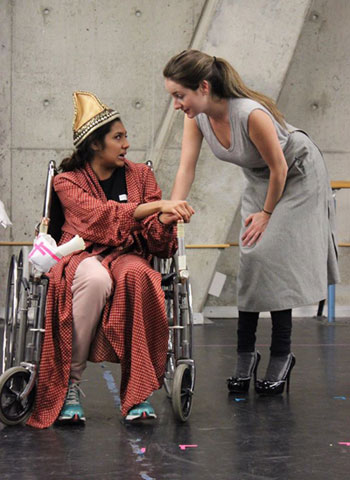 A Party for Boris uses the metaphor of disability to pose trenchant questions about human relationships and brutality in a violent world. In the play, the Good Woman, a wealthy philanthropist with no legs, prepares a birthday party for her much younger husband, Boris, a former resident of the Home for Cripples built by the Good Woman. Like her, Boris is legless and in a wheelchair – as are the party guests. The housekeeper is the only person in the house with legs, but on the night of the party, the Good Woman insists that she also use a wheelchair “so you will fit in with the rest of us.”

“Bernhard was chronically ill from childhood, which naturally informed his view of human fragilit,” said Earnest. “But he also grew up in Austria, in the heart of a brutal war [WWII]. Inevitably, that also shaped his intellectual and political development, and his thinking about human nature.”

An MFA candidate in directing in York’s Graduate Program in Theatre, Matthew Earnest is a seasoned theatre-maker. His productions of new and classical plays, operas, musicals and his own original works and literary adaptations have been seen across the U.S. and Europe. He served as founding artistic director of the NYC-based touring company deep elum ensemble from 1995 to 2007, and has been an associate artist at Germany’s English Theatre Berlin since 1999. He is currently artistic director of The Lunar Strategem, a production and touring company based in Huntingdon, W.Va.

Earnest was a Drama League Directing Fellow and is an alumnus of Richard Foreman’s Obie-winning Blueprint Series for Emerging Directors. His awards include an Access to Artistic Excellence grant from the National Endowment for the Arts, the Dallas Theater Critics Forum Award, a BIFF Award at the New York International Fringe Festival and Audience Favourite at the Dublin Fringe. His productions have been cited on media Top 10 lists across the U.S.

A Party for Boris is designed by undergraduate theatre students and performed by members of York’s Fourth-Year Acting Conservatory.

Scenic designer Yasaman Nouri describes the world she’s created for the play as “a conversation starter for how we experience our bodies, and how difference in ability affects and shapes that individual experience.” Costume designer Jamin Daniel said: “I felt it was important to express how important Boris’ party is in the lives of the guests. Keeping the theme in mind, I wanted to explore and celebrate what it means to have a body.”

With Extraordinary Lives: Difference and Ability, York’s Department of Theatre is devoting the current academic year to exploring questions around dis/ability and performance, working with members of the wider arts community to challenge traditionally “ableist” modes of making theatre and to “crip” its studios, classrooms and stages.

The department’s thinking around this theme is guided by an advisory panel of prominent deaf, mad and “crip” artists who are serving as facilitators for the season. The panel includes multidisciplinary queer, non-binary, deaf artist and educator Sage Willow; Eliza Chandler, artistic director of the non-profit arts organization Tangled Art + Disability and assistant professor in the School of Disability Studies at Ryerson University; Syrus Ware, a member of the Performance Disability Art Collective, co-programmer of Crip Your World (Mayworks 2014), coordinator of the Art Gallery of Ontario’s Youth Program and a facilitator/designer at The Banff Centre; and Sarah Garton Stanley, co-creator of SpiderWebShow and associate artistic director (English Theatre) at Canada’s National Arts Centre.

A Party for Boris and future Theatre @ York shows will include an ASL interpreted performance as well as a relaxed performance designed to reduce anxiety and provide a safe, enjoyable experience, taking into account variable sensory, communication or learning needs and abilities.