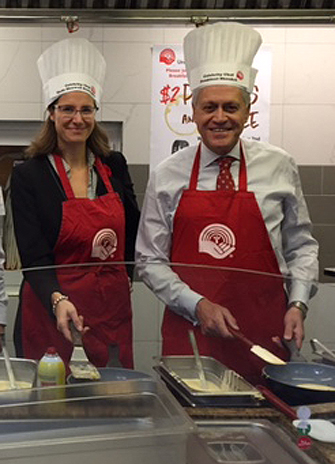 The 2016 York Cares Campaign in support of the United Way Toronto officially launched Nov. 2. The goal of this year’s campaign is $200,000. Funds raised will go towards supporting the community programs and initiatives that are part of the United Way. York University’s campaign will run until Nov. 23.

This year’s campaign kicked off Nov. 2 with the President’s Pancake Breakfast. After chipping in a toonie, several hundred students, staff and faculty waited patiently for their pancakes, with many taking the time to chat and joke with members of York University’s senior leadership team who were making the pancakes.

Guests at the breakfast had a chance to win a FitBit Flex, which was donated by Aramark Food Services. Debra Crooks, a staff member in the Division of Advancement, was the lucky winner of the Fitbit.

“I am happy to report that this year we saw a 20 per cent increase in funds raised on behalf of United Way at the President’s Pancake Breakfast. This is a great accomplishment and one we should be very proud of,” said Mandi Hickman, manager, community relations. “The Pancake Breakfast marks the start of the 2016 York Cares United Way Campaign. The pledge drive runs from Nov 2 to Nov 23 and within this time period, we have many exciting events on deck.

“Aramark generously donated the pancake batter, toppings and coffee, which allowed us to put all of the proceeds toward the United Way. We greatly appreciate their generosity and the support of their team,” added Hickman.

York staff and faculty members each received personalized electronic pledge cards on Nov. 2, which can be used to make a donation to the United Way. Updates on the campaign will be posted in YFile and via email.

For more information, visit the 2016 York Cares United Way Campaign website, or by email to yucares@yorku.ca.