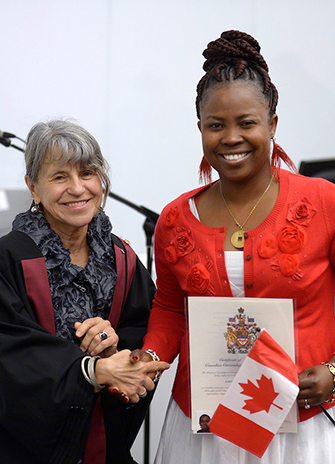 Students taking a course on Canadian citizenship at York University’s Glendon College were given a unique experiential education opportunity on Nov. 3, when they met with about 65 new Canadians an hour before they officially received their Canadian citizenship.

Audrey Pyée, assistant lecturer in Glendon’s Canadian Studies program, said students in her course learn about notions of civic, political, social and cultural and global citizenship in Canada. Students moderated roundtable discussions with the new Canadians just before the ceremony.

Pyée said the event gives students “a wonderful chance to speak to the new Canadians and their families about the meaning of Canadian citizenship to them.”

She said, “They will hear, first-hand, about the experiences of immigrants coming to Canada, so they can better understand the difficulties many face and the opportunities that they seek in becoming citizens.”

“The event was interesting because it put in context the themes that we have been studying in class,” said Meghan Williams, a student in the course. “It helped bridge the gap between the class content and the real world. It was rewarding to be able to experience the energy  and to witness the hope that people come with.”

Dyane Adam, former principal of Glendon College and Canadian Commissioner of Official Languages and current Chair of the planning board on a French-Language University, presided over the ceremony and Christina Clark-Kazak, associate principal, Research and Graduate Studies at Glendon, was the guest of honour.

Clark-Kazak explained, “Our bilingual Glendon campus was such a fitting venue for this citizenship ceremony celebrating Canada’s diversity. I would like to congratulate Audrey Pyée on proposing this partnership and thank Michael Ah-Choon, students in Professor Pyée’s class and members of Master’s in Conference Interpreting Program for making the event such a success.”