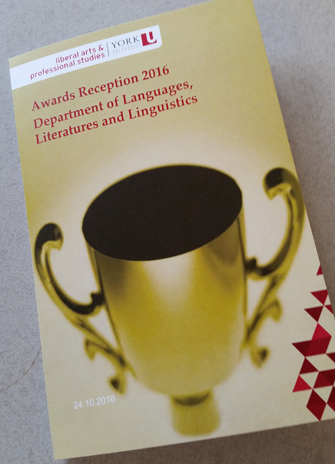 On Monday, Oct. 24, the Department of Languages, Literatures & Linguistics in the Faculty of Liberal Arts & Professional Studies (LA&PS) hosted an awards reception to celebrate 19 outstanding students for their academic achievements.

The event, which took place at and was sponsored by Founders College, saw more than 45 guests attend the event, including students, their support networks, DLLL faculty and the LA&PS Associate Dean Students Professor Peter Avery.

The awards went to:

The award winners are majors in a variety of different programs across York University including, German Studies, Italian Studies, Spanish, Linguistics, Classics, Political Science, LASO, ADMS, Kinesiology, Visual Arts, Schulich School of Business and Lassonde School of Engineering.  Some are current students and a few are now listed among the alumni of LA&PS.

“Many of our students, in addition to studying hard, attending lectures, being part of campus life through York University’s many clubs and volunteer opportunities, also work part-time and even full-time hours,” said Professor Roberta Iannacito-Provenzano, chair of DLLL, in her welcome remarks. “When I’m asked to write letters of recommendation for our students and I read their CVs, it always amazes me to see how these exceptional students are able to balance their studies and their extracurricular activities. I am very proud of each and every one of you!”

Upon presentation of each award, students were asked why they decided to study language in DLLL. One student stated that he took Arabic as he wanted to hone his skills in the language and added that it was his Arabic language courses that helped him secure a job as a settlement officer after graduation.

Many students (Italian Studies, Hebrew, German Studies, Jamaican Creole, Persian, Portuguese and Swahili) affirmed that they wanted to learn the language of their families and that DLLL offered in-depth courses in literature and culture, including film and the immigrant experience, that helped them better appreciate their origins.

Students majoring in business and engineering spoke about the importance of combining language training with their professional degrees in order to give them an edge when applying for jobs both in Canada and internationally.

For more information, visit the Department of Languages, Literatures & Linguistics website or contact Iannacito-Provenzano  by email to lllchair@yorku.ca  or roberta@yorku.ca.