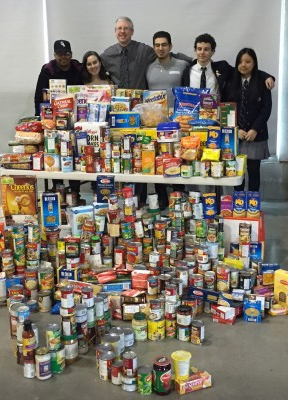 In his final semester of studies, Divito enrolled in an undergraduate sociology course taught by Faculty of Liberal Arts & Professional Studies Professor Peter Dawson – a course that left such an impression on him that he wrote to York’s administration.

“I really wish I knew about experiential education in my first year of university,” he said. “I really don’t think students at York know about EE opportunities in general, and I believe it is very, very important to share that message.”

During the course, Dawson provides students with the opportunity to become collectively involved with one of a number of collaborative initiatives from which to choose. Students, for example, have an opportunity to work with community partners such as: a women’s shelter to combat violence against women; the Canadian Truth and Reconciliation Commission to educate the public about the residential schools system; a refugee settlement organization and a center whose mandate it is to combat online bullying and child sexual abuse; and, there are other initiatives from which students may choose

Divito collaborated with a group of students to take on a project involving the North York Harvest Food Bank, an organization that has partnered with the course for the last several years.

Throughout the semester, students are engaged in learning about social justice through actions – an experience that Dawson describes as being close to an internship.

“It gives them hands-on experience,” he said. “They learn the theory in the classroom and apply it in real work and real life, and it certainly adds to their desire to change the world.”

The project benefitting the North York Harvest Food Bank is a continuous initiative, says Dawson, where students take over the mission from previous students but can outline and work toward new goals each semester. Students previously involved come into Dawson’s class at the beginning of the semester, and take new students through past work.

Several years ago, students involved with North York Harvest Food Bank initiative tasked themselves with the mission to conquer childhood hunger. The result was a petition demanding the Canadian government take action to end child hunger by allotting funding for food banks and/or other programs to ensure no child goes without food.

The group of students determined that, as a United Nations signatory, the Canadian government is obligated to ensure children’s rights are upheld, but the 2014 Who’s Hungry Report outlines well over a million people in the GTA rely on food banks, with 31 per cent being children. However, financial constraints limit the supply at food banks.

“We determined that children have a right to food, and the government should fund organizations like the North York Harvest Food Bank,” said Jibran, who was enrolled in a Human Rights and Equity department course. She added they were able to collect more than 15,000 signatures.

This past August, that petition was submitted to MP Judy Sgro, who will deliver the petition to the House of Commons.

Divito said Sgro plans to present the petition 5,000 names at a time to create a “louder voice” on the issue.

As well as advocating for changes in policy, students also addressed the issue at a grassroots level by volunteering at the food bank, organizing food drives (that raised upwards of 5,000 pounds of food), visiting elementary and high schools to educate and raise awareness about hunger, and more.

Leslie Venturino, development associate at North York Harvest Food Bank, said over the last three years, students from Dawson’s class have helped approximately 1,850 families through their efforts to collect food. In the past year, York students helped to provide 8,100 meals.

To supplement the experiential aspect of the course, students are also asked to do research on their topic, conduct studies and submit papers on the project including an analysis of the social impact.

Jibran, who is in her fifth year of studies at York in children’s studies and education, said she is still volunteering with the North York Food Bank.

“Out of all the courses I’ve taken at York, this is the one course I know for sure I will remember for the rest of my life,” she said. “It gives us purpose. It opens doors. It makes you realize what you are passionate about.”

By the time the course is over, she said most students were not focused on their grade, but on what difference they had made in the world.

“This course is going to change your life,” she said. “People  think you can’t make a difference, but if you are working collaboratively, you can really, really speak volumes.”

Dawson said watching the students become engaged in social justice, and become passionate about a project is “quite remarkable”.

Video: Professor Peter Dawsons globalization class teamed up with the North York Harvest Food Bank in 2015-2016 to help end child hunger. They raised over 4050 pounds of food and spread the word on a global scale in nonprofit activism.