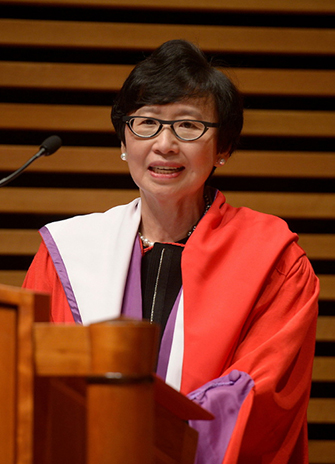 Curiosity, determination and resiliency are the key traits that provide a strong foundation for a successful business career, according to Janice Fukakusa, chief administrative officer and chief financial officer of the Royal Bank of Canada.

“Be resilient and adaptable,” Fukakusa advised Schulich’s 2016 EMBA graduating class on Oct. 21, when she was awarded an honorary doctor of laws by York University for her achievements in business and the community. “Learn from your experience and you’ll be surprised how often things will work out in the end.”

Fukakusa, who graduated from the Schulich School of Business with an MBA in 1979, continues to have strong ties to her alma mater and is a member of the Dean’s Advisory Council.

“I could not be more touched and humbled to receive this honorary doctorate,” Fukakusa said.

She was inducted into Canada’s Most Powerful Women Hall of Fame in 2007, was named Canada’s CFO of the Year in 2014 and has been named among the world’s 25 Most Powerful Women in Banking four years in a row. Fukakusa also serves on the boards of the Princess Margaret Cancer Foundation and the Wellspring Cancer Support Foundation.

One of eight children born to parents who emigrated from Japan to Canada, Fukakusa said she has strongly relied upon her own curiosity, determination and resiliency as her career progressed, from her early years working as a cashier at a dry-cleaning business to her high-profile role with RBC.

Schulich Dean Dezsö J. Horváth echoed Fukakusa’s sentiments as he addressed the 36 new graduates about to transition into the next stage of their lives.

“You join a long line of successful Kellogg-Schulich graduates who have gone on to do great things and reach new heights. We are confident that you will do the same,” Horváth said.