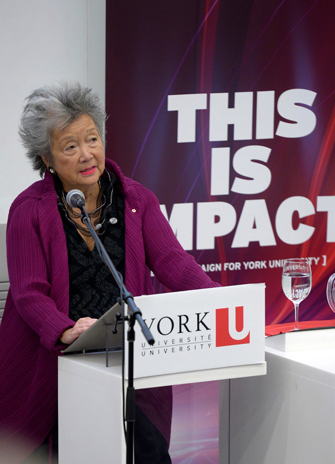 Canada has the desire, generosity of spirit and the geographical space to welcome even greater numbers of refugees, but more must be done to help them settle in the country, said the Rt. Hon. Adrienne Clarkson (LLD [Hons.] ‘03), former Governor General of Canada, during her keynote address at the Re-imagining Refugee Symposium on Oct. 17.

The bilingual symposium took place at the University’s Glendon campus and brought together more than 150 researchers, policy experts, public servants, academics, students, former refugees and representatives from non-governmental organizations, for a conversation designed to promote a sharing of knowledge and renewed thinking on the refugee experience.

Clarkson, her brother, and parents came to Canada in 1942 as refugees. She rose through the ranks of the country’s public broadcaster to become one of CBC’s most respected interviewers. A best-selling author, she was the appointed the 26th Governor General of Canada.

In her remarks to the symposium participants, Clarkson offered practical solutions that Canada could implement to help refugees cope with their situation. “Refugees come with a sense of complexity, they have lost everything and are loathe to lose it again, so they have an inbuilt sense to make it work,” she said.

The question of what it means to “belong” has preoccupied her and referencing her own experience as a refugee, she said that belonging is strengthened through an equitable and robust public education system, better services to help refugees recover from the trauma that forced their migration, and a less bureaucratic system for recognizing professional credentials. “You are a victim and you have to leave everything behind, which is very different from choosing to migrate,” noted Clarkson.

The horizon is bright for Canada’s effort to resettle refugees, she said, noting that Canada’s complex ethnic background means the country is very strong and there is a lateral trust among equals in Canada.

“When you come to Canada, you depend on the kindness of others,” she said. It is through this experience of kindness refugees receive a “wonderful gift that builds trust” and the result is that many refugees pay it forward and this enriches the fabric of Canada.

Following Clarkson’s remarks, a panel discussion brought together Loly Rico, founder of the FCJ Refugee Centre, president of the Canadian Council for Refugees, Mary Jo Leddy, founder of Toronto’s Romero House and Professor Jennifer Hyndman, director of York’s Centre for Refugee Studies. The panellists discussed the importance of re-imagining refuge based on human rights and dignity and committing to actively engaging with people who are seeking refuge. Local and national groups, along with individual Canadians, can have a major impact on the response to an enormous international humanitarian issue, they said.

Leddy said that it is important to pursue community support when resettling refugees. Her work with Romero House has been strengthened, she said, because of the help and generosity of the community. She noted that there needs to be a better system for helping refugees move from temporary situations to permanent communities. The high cost and lack of affordable housing in urban areas such as Toronto are having an impact on Romero House, she said, because many refugees and their families cannot move from the temporary accommodations into communities. “We need to reimagine refugee resettlement differently,” she said, “we need to look at the space we actually have including empty churches, empty houses and reimagine how government money can be spent in other ways.”

She noted that in New York City, every hotel donates two floors to house families in transition.

Rico, who came to Canada 26 years ago as a refugee, said that the experience is one of immense trauma and there is an urgent need for support services to help refugees feel safe. She said there needs to be a better system of family reunification as well fair refugee hearings, an elimination of the different “categories” of refugees and access to services and education. “Canada is a huge country,” she said. “Let’s open the doors and fill her up!”

It is also important to provide proper housing to refugees to help them heal and enhance their feeling of being safe, said Rico. “It makes a difference in how you belong,” she said, “it is more difficult if you can’t sleep or you are homeless.”

Hyndman said local and national actions are especially important because the global refugee system, its laws, and policies are based on an outdated post-war model. The term “protracted refugee situation” is a euphemism for failure, she said.

“The existing international refugee regime is sorely outdated and just not working. We have a lot of mechanics tinkering with a very old mechanism. What is needed is an inventor, an architect who can redesign the way we engage refugees.”

All of the panellists stated that North American attitudes towards refugees changed dramatically following the September 11, 2001 attacks in the United States and refugees were viewed with suspicion and as potential security threats. The shift toward seeing refugees as people who are traumatized and in need of safety and support has been slow to return to its pre-September 11 level and this has furthered complicated the global refugee crisis.

The symposium ended with a comprehensive summary delivered by Professor Susan McGrath, the former director of the Centre for Refugee Studies. Following the panel, symposium participants took part in a reception and then viewed student presentations on re-imagining refuge.

“The global refugee crisis is one of the most pressing and challenging issues of our time, and given York’s historic commitment to social justice, this Mindshare symposium is consistent with our ongoing aim to contribute meaningfully to global conversations and advance solutions to global challenges,” said Mamdouh Shoukri, York University’s president and vice-chancellor. “From student and community groups who have mobilized to sponsor and welcome refugees, to the valuable work being done at our Centre for Refugee Studies and by researchers across the University to engage with issues of migration and resettlement, I am justifiably proud of York’s leadership in this area.”