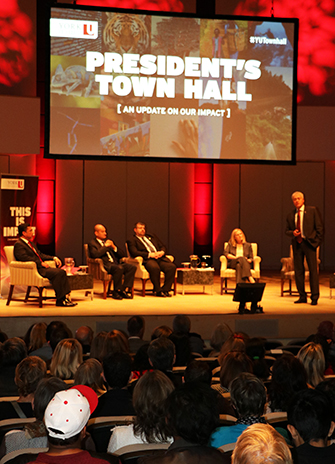 For York University, 2015-16 was a very good year despite a sea of change affecting postsecondary institutions in Ontario. That was the central message delivered in the Oct. 11 President’s Town Hall.

The annual town hall is a central part of the University’s ongoing efforts to communicate and facilitate engagement with the community. This year’s event also marked the last town hall for York University President and Vice-Chancellor Mamdouh Shoukri and York Vice-President Finance and Administration Gary Brewer as both will be retiring next year.

The University’s remarkable advances in academic planning, teaching and learning; the intensification of research and funding recognition for major research projects; a new campus in Markham, in the heart of York Region; the rollout of a new shared accountability and resource integration budget model; advancements in institutional integrated resource planning; infrastructure development and renewal; and the successful launch of a new $500-million fundraising campaign, were just some of the topics covered in the 90-minute town hall. (To view a video of the full town hall proceedings, visit https://youtu.be/sDhLMjA5aBI.)

“We live in a world that is characterized by change,” said York University President and Vice-Chancellor Mamdouh Shoukri in his opening remarks delivered to the capacity crowd gathered at the town hall. “Change is happening around us and universities are central to everything that goes on in our lives.”

Universities, said Shoukri, are continuing to navigate changes that have been underway for the past five years. In fact, the impact of these changes on postsecondary education was first predicted by the president and senior administrators in the 2011 and 2012 town hall events. In the 2012 town hall, Shoukri spoke in depth about how universities and colleges were coping with a triple threat of reduced resources, increased demand, and the pressure to differentiate. To chart the uncertain waters ahead, he announced that York University, through a combination of proactive efforts in advocacy, efficiency and planning, was positioning itself to handle that triple threat.

And while the wave of change continues, said Shoukri, the fact that York University experienced such a productive 2015-16 academic year in realizing so many advancements means that those proactive efforts are working.

He reminded the audience that universities in the province submitted Strategic Mandate Agreements three years ago. The universities are now in the midst of negotiating new agreements this year that will put new expectations on universities, including key performance indicators and letters of accountability, both of which will determine the level of funding each university will receive going forward, said Shoukri.

There’s also an added pressure associated with changing demographics, with demand for postsecondary education expected to stay flat or even decline slightly for the next four or five years, followed by an increase in growth in key areas, such as York Region. Student expectations are also changing with a greater focus on programs that offer immediate employment prospects. Added to the mix is the fact that students are expecting better technology in learning, more choice in learning and greater mobility.

“With all of these factors, York University is in a unique position. We are building on our strengths, diverse programs, and while we have experienced success, there are many opportunities in the future,” he said, citing the new Markham campus that is being built at the heart of the rapidly growing York Region and increased partnerships with stakeholders that will help the University to continue to adapt.

The University has a great advantage to cope with significant change because of its culture of planning, said Shoukri. He noted the important role the University community has played in contributing to, and realizing the outcomes of this planning, as evidenced by the new University Academic Plan, the Shared Accountability and Resource Planning (SHARP) Budget model, the completion of state-of-the-art buildings including the new Bergeron Centre and the York Lions Stadium, and the community’s engagement in strategic research planning and intensification.

“We are in a great position to move forward,” he said.

A theme running throughout their reports echoed the continued importance of the pan-University efforts underway in academic planning (with an enhanced focus on teaching, learning, the student experience, and community engagement); institutional integrated resource planning with the University community; research intensification; financial sustainability; ongoing new facility development and infrastructure renewal; community safety efforts; and the launch of IMPACT: The Campaign for York University, which has a goal of raising $500 million to support the University’s key priorities. All of the activities focused on helping the University weather the sea of change affecting Ontario universities.

Following the presentations was a question-and-answer session, with the administrative team taking questions from the audience, as well as via Twitter and e-mail.  The questions covered a range of topics including academic programming in the new Markham campus, responsible investing, positioning of universities in the Greater Toronto Area, sexual assault policy developments, a food service contractor’s negotiations with its workers, and a greater role for alumni on campus.