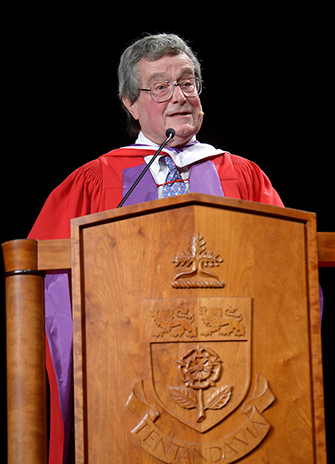 Granduands from Glendon College and the Faculty of Health were reminded of the adage “Nothing ventured, nothing gained” during convocation ceremonies on Oct. 19, when sports visionary and philanthropist Paul Beeston delivered the convocation address.

Beeston, one of Canada’s most celebrated sports leaders, was awarded an honorary doctor of laws degree by York University during the first of five convocation ceremonies this fall.

Over the past four decades, Beeston has played a principal role in shaping baseball in Canada. In 1976, he was hired as the Toronto Blue Jays’ first employee. He fulfilled progressively senior roles at the organization, culminating in president and chief executive officer, titles which he held until his 2015 retirement. During his tenure with the Jays, he was instrumental in guiding the team to two World Series wins.

From 1997 to 2002, he took a hiatus from the Jays to serve as president and chief operating officer of Major League Baseball. He currently serves on the board of the National Baseball Hall of Fame. He was made a member of the Order of Canada in 1998, and he has been inducted into both the Canadian Baseball Hall of Fame (2002) and Canada’s Sports Hall of Fame (2005). In 2008, his name was added to the Blue Jays’ Level of Excellence at the Rogers Centre. In recognition of his peerless contributions to the Blue Jays franchise, he was appointed president emeritus in 2016. Toronto Mayor John Tory presented Beeston a key to the city of Toronto on Sept. 28 of this year.

He is also a distinguished philanthropist and volunteer.

“Today I stand in front of you with so much humility because it has been a lifelong dream of mine to be part of this city, this country,” he said of the honourary degree. “I was not expecting it, but I was thrilled, honoured and very humbled by it.”

Beeston told graduating students that he attended the School of Accounting of York University in the late 1960s, and at that time the enrollment was roughly 5,000, and highlighted how much different things are today.

“You are graduating from a university with international recognition, with 54,000 students, that has two campuses and soon to have a third, that is prepared you for what your future is going to be,” he said. “That, and working for tomorrow, is what education is all about.”

Convocation is a celebration of the past, he said, and he urged students that when looking to the future to consider two things: be prepared to take a chance, and learn from your failures.

He shared his own personal experiences in doing so – taking a chance by moving his young family to Toronto in the mid-1970s to pursue his career as the Blue Jays’ first employee, and later leaving that job after 22 years to try something else.

“I had fun, I enjoyed it, I did the things that were necessary, but more importantly than that, every one of the things I did moved me from the comfort zone that I lived in,” he said. “I took a chance … I would encourage all of you not to shy away from making those decisions … and taking on new challenges.”

There’s a corollary to making a chance, he said, and that corollary is “don’t be afraid to make a mistake.”

He also encouraged graduates to protect and grow their “personal brand”, and to remember that it is something they can control.

“Every one of you has a personal brand … and that is something you should zealously guard,” he said. “It is your reputation; it is what you stand for … you will be measured by that reputation.”

In closing, Beeston suggested that those who enjoy success often enjoy life. He reminded graduates to consider that when making decisions, and taking risks, in the future.

“I know of nobody that is successful that doesn’t really enjoy themselves,” he said. “You want to get up, and you want to enjoy.”