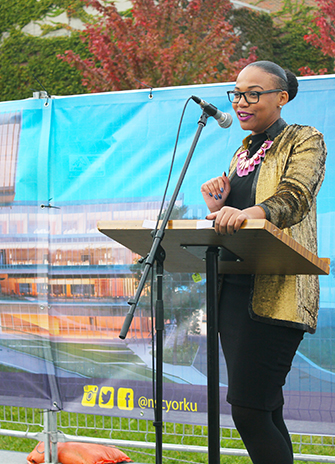 A momentous occasion for current and future students of York University was celebrated Oct. 13 with the official sod-turning for the New Student Centre – a multipurpose facility designed to provide more resources to students.

The event, held on the Roy McMurtry Green, gave guests an awareness of the impact the building will have on student life by offering more space for study and recreation, events, faith-based rooms, club offices and more.

Before calling guest speakers to the podium, organizers invited Elder Philip Cote to conduct a blessing of the land on the construction site to acknowledge the presence of the building on the traditional territory of many Indigenous Nations who have and continue to call the territory home, including the Mississaugas of the New Credit First Nation, the Haudenosaunee Confederacy, the Anishinabek Nation, the Huron-Wendat and the Metis Nation.

Cote performed a smudging ceremony, following by a traditional song.

“We see the student experience as a development of the body, the mind and the soul,” said Roberts. “This building is a testament to creating spaces that will nurture the potential of our future.”

Support for the new 126,000-square-foot facility was unprecedented, said Williams, noting that the referendum for the New Student Centre resulted in the highest voter turnout in the history of Canadian postsecondary institutions.

Close to 10,000 votes were cast, with approximately 90 per cent in favour of the levy to fund the construction, operation and building maintenance.

Guest speakers took the podium to share their thoughts on and praise for the new facility. Karissa John, president, Aboriginal Students Association at York, and Randy Pitawanakwat, coordinator, Aboriginal Student Services, were invited to say a few words. They applauded YUSC for exploring ways to indigenize the new centre and ensuring the Indigenous community is reflected on campus and in university life.

“I’d like to thank organizers for making space for Indigenous voices to be heard,” said John. “Thank you for your commitment … for erasing the erasure that I’ve experienced here.”

One of the steps taken to indigenize the facility, said Williams, will be to display Indigenous artwork throughout the building.

Gary Brewer, vice-president finance and administration, took the stage next and commended York students for their commitment to such a massive project.

“Today’s groundbreaking marks the culmination of over six years of collaborative work between the Student Centre and the University,” he said. “The existing Student Centre has been a model of student leadership and governance.”

He further noted that the number of York students has doubled since the Student Centre opened 25 years ago.

Williams offered some words on the milestone, sharing with the hundreds of guests some of the building highlights: Silver LEED certification and environmental sustainability (including a green roof), a design modelled for crime prevention, and a focus on accessibility with gender-neutral washrooms, ramps and visible signage.

“Today we come together to celebrate start of new chapter in our already vast history,” Williams said. “This moment … is symbolic of how powerful the student voice is.”

Chenthoori Malankov, president, York Federation of Students, and David Perkins, vice-president of finance and services, Graduate Students Association, were also given an opportunity to speak at the event, and highlighted the positive effect the New Student Centre will have on future students.

Guest speakers were then invited to fill a time capsule with 13,000 student messages, followed by the ceremonial sod-turning for the facility.

The York University student body is the first in Canada to secure innovative capital project financing for a second student building.

For more information about the New Student Centre, visit newstudentcentre.ca.