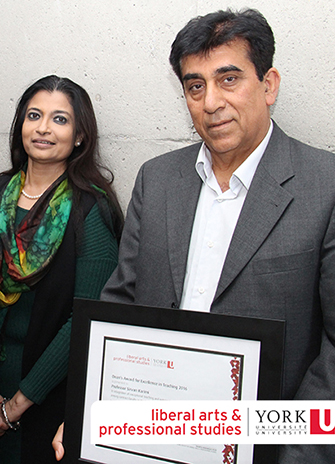 The Faculty of Liberal Arts & Professional Studies (LA&PS) recognized excellence in teaching and research during an annual ceremony at its first council meeting for 2016-17. The 2016 winners hail from the fields of equity studies, public policy, sociology and history.

The Dean’s Award for Excellence in Teaching recognized two faculty members and one teaching assistant for their exceptional achievements in pedagogy and student engagement.

The LA&PS Awards for Distinction in Research honoured one emerging and one established researcher for surpassing the expectations of their field in research, scholarly or creative work.

Dean’s Award for Excellence in Teaching

“Teaching is one of the primary ways in which the university contributes to society,” said Ananya Mukherjee-Reed, dean, LA&PS. “We have incredible strengths in teaching, which seamlessly bring together theory and practice, engagement and reflection. The outstanding students our Faculty produces bear witness to how our colleagues are able to achieve this feat.”

Professor Tania Das Gupta from the Department of Equity Studies received the Dean’s Award for Excellence in Teaching – Full-time Tenured Faculty. Her teaching techniques are unsurpassed. A teacher, scholar, community activist and social justice trailblazer, she is known for challenging the norm, setting a superior standard of academic curiosity and liberating the student imagination.

“I hope students will take away from my classes a critical awareness and knowledge of the world around them, a passion for social justice, the belief that social change is possible, empowerment to follow their dreams and a set of skills and resources with which to follow them,” Das Gupta said.

Professor Sirvan Karimi from the School of Public Policy and Administration received the teaching award in the Contract Faculty category. A master of the material he teaches, he is known for going beyond expectations to support students and making innovative contributions to the curriculum. As an educator and a mentor, he is helping to shape a generation of critical-thinking students who will one day influence policies and governance.

“Mentoring should be envisaged by both mentor and mentee as a golden opportunity to advance and enrich academic goals and professional development,” Karimi said.

PhD candidate Rhonda George, from the Department of Sociology, won in the Teaching Assistant category. She is passionate, committed and innovative in facilitating student success, growth and development. A teaching assistant of the highest calibre, she bridges the gap between theory, history and the contemporary and creates an accessible, equitable and inclusive classroom where students can engage in learning.

“My methods are intended to challenge and engage learners, encourage critical thinking skills, creativity and originality and support the academic, intellectual and personal growth and development of my students,” says George. “I want my students to develop an understanding that learning is a life-long process and that the things that we are learning have real-life applications.”

LA&PS Award for Distinction in Research, Creativity or Scholarship

“This year’s winners embody the insatiable quest of true scholars to continuously pose new questions and as well, to serve as public intellectuals on critical contemporary questions,” said Mukherjee-Reed. “It is an honour to count among our colleagues this year’s winners, Professors Jonathan Edmondson and Boyd Cothran, both from the Department of History.”

Edmondson, Department of History Chair, received the LA&PS Award for Distinction in Research, Creativity or Scholarship in the Established Researcher category. He is world-renowned as an expert on the Roman Empire, Roman inscriptions and Roman social history. His body of work, as well as his strong commitment to sharing his research, has shed light on the Roman world for scholars, students and the public.

“I’m excited about my research on the Roman Empire, especially Roman Spain, because it’s given me access to a range of new monuments with inscriptions, previously unpublished, that have the potential to throw new light on the impact of Rome on Indigenous societies,” said Edmondson. “Although people have been studying the Roman Empire for centuries, we can always pose new questions about, and gain fresh insights into, the Roman world.”

Cothran, a history professor, was honoured in the Emerging Researcher category. He will be presented with his award in the Winter 2017 semester. Since earning his PhD four years ago, he has achieved an outstanding record of scholarly research in the growing field of Indigenous history. His work, shared in both academic and public venues, is reframing the U.S. narrative and places Indigenous history at its centre.

“What excites me the most about the growing field of Indigenous history is how we are rewriting the history of North America by reclaiming the central role Indigenous peoples have played in the development of our shared society,” said Cothran. “For too long, historians wrote histories of North America that ignored Indigenous people, denying them a history and by extension a future. Indigenous history is an exciting field because every day it seems like there are new stories being discovered and new perspectives on old subjects being shared.”