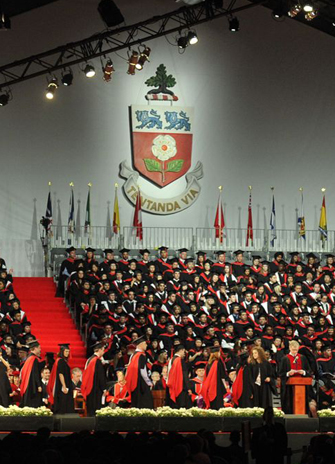 At York University’s fall convocation ceremonies, two exceptional individuals who have contributed significantly in their respective fields will receive honorary degrees. The recipients are Paul Beeston, a sports visionary and philanthropic superstar, and Janice Fukakusa, a financial leader, education and health services advocate and champion of Japanese-Canadian culture.

“Paul Beeston and Janice Fukakusa have been trailblazers in their respective fields, each possessing a strong sense of community spirit and drive that extends to the remarkable work they do to give back to their communities through volunteer service and philanthropy,” said York University President and Vice-Chancellor Mamdouh Shoukri. “We are delighted to honour these Toronto civic leaders and I know they will be a great inspiration to our graduating students as they set out to make their own impact.”

Beeston is one of the country’s most celebrated sports leaders. Over the past four decades, he has played a principal role in shaping baseball in Canada. In 1976, he was hired as the Toronto Blue Jays’ first employee. He fulfilled progressively senior roles at the organization, culminating in president and chief executive officer, titles which he held until his 2015 retirement. During his tenure with the Jays, he was instrumental in guiding the team to two World Series wins.

From 1997 to 2002, he took a hiatus from the Jays to serve as president and chief operating officer of Major League Baseball. He currently serves on the board of the National Baseball Hall of Fame. He was made a member of the Order of Canada in 1998, and he has been inducted into both the Canadian Baseball Hall of Fame (2002) and Canada’s Sports Hall of Fame (2005). In 2008, his name was added to the Blue Jays’ Level of Excellence at the Rogers Centre. In recognition of his peerless contributions to the Blue Jays franchise, he was appointed president emeritus in 2016. Mayor John Tory presented Beeston a key to the city of Toronto on September 28th of this year.

Beeston has distinguished himself as a philanthropist, giving to diverse causes, including the Holland Bloorview Kids Rehabilitation Hospital, where the Beeston Cup in wheelchair hockey was a much-anticipated annual event. He has also served as chair and member of the board of trustees for the Centre for Addiction & Mental Health (CAMH), director of the Blue Jays Care Foundation and board member of Huron University College at the University of Western Ontario. He has a bachelor’s degree from the University of Western Ontario.

York alumna Janice Fukakusa (MBA 1979) is changing the face of women in the financial sector. She is chief administrative officer and chief financial officer of the Royal Bank of Canada (RBC), Canada’s largest banking institution. Since joining RBC in 1985, she has worked in positions across the organization’s many sectors. She has a bachelor of arts from the University of Toronto and master of business administration from the Schulich School of Business. Before RBC, Fukakusa worked at PricewaterhouseCoopers LLP, where she achieved her chartered professional accountant and chartered business valuator designations.

Her numerous professional accolades include being inducted into Canada’s Most Powerful Women Hall of Fame, selected as Canada’s CFO of the Year (2014), named a fellow of the Institute of Chartered Professional Accountants of Ontario and chosen as one of the 25 Most Powerful Women in Banking by American Banker magazine for four consecutive years.

A child of Japanese immigrants interned in camps in Canada during the Second World War, Fukakusa holds her Japanese-Canadian identity close to her heart. As an active member of the Japanese Canadian Culture Centre, she has assumed a leading role as a cultural and fundraising advocate. She also serves on several not-for-profit organizations, including Ryerson University, the Princess Margaret Cancer Foundation, Wellspring Cancer Support and the Schulich School of Business. She facilitated RBC’s $2-million gift toward the school’s Centre for Global Enterprise in 2011 and is currently a member of the Dean’s Advisory Council. In 2013, she received both Schulich’s Alumni Recognition Award for Outstanding Public Contribution and a Bryden Alumni Award for Pinnacle Achievement.