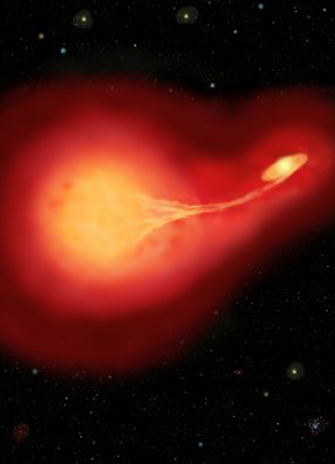 Planets that revolve around two suns may survive the violent late stages of the stars’ lives, according to new research out of the NASA Goddard Space Flight Centre and York University. The finding is surprising because planets orbiting close to a single sun, like Mercury and Venus in our solar system, would be destroyed when the aging star swells into a red giant.

The paper, “Tatooine’s Future: The Eccentric Response of Kepler’s Circumbinary Planets to Common-Envelope Evolution of their Host Stars,” has been accepted for publication in The Astrophysical Journal.

“This is very different from what will happen in our own solar system a few billion years from now, when our Sun starts to evolve and expand to such a tremendous size that it will engulf the inner planets, like Mercury and Venus and possibly Earth too, faster than they can migrate out to larger orbits” says Kostov. “It seems that if we had a second star in the center of our solar system, things might go differently.”

Binary star systems are ubiquitous in the Universe and consist of two stars that orbit around a common center of gravity. If the two stars are close enough to each other, when one starts evolving and expanding into a giant, they exchange material and spiral towards each other resulting in their sharing a common atmosphere (also called a common envelope). The binary star system ends up losing a large amount of mass, or might be destroyed in a supernova explosion.

“Given the exciting recent discoveries of planets circling binary stars, some with orbits similar in size to that of Mercury around the Sun, we were curious to explore the ultimate fate of these Tatooine worlds,” says Jayawardhana. “We found that many such planets are likely to survive the messy and violent late stages of their stars’ lives by moving farther out.”

The team, which also included Daniel Tamayo of the Canadian Institute for Theoretical Astrophysics and Stephen Rinehart of NASA Goddard, simulated the fate of nine circumbinary planets recently discovered by NASA’s Kepler mission. They found that the planets will predominantly survive the common envelope phase – even those orbiting very close to their stars. In addition, the planets can migrate to farther orbits similar to what it would be like if Venus moved out to where Uranus orbits our Sun. In some cases, planets can even reach more than twice the distance to Pluto.

Interestingly, when there are multiple planets orbiting a binary star, some can be ejected from the system, while others can switch places or even collide with their stars.

“The reconfiguration can be quite dramatic when there are several planets,” says Moore. “Although all of the known circumbinary planets are gas giants, it is possible that somewhere out there is a terrestrial circumbinary planet that migrates to an orbit that now makes the planet potentially habitable for a little while.”