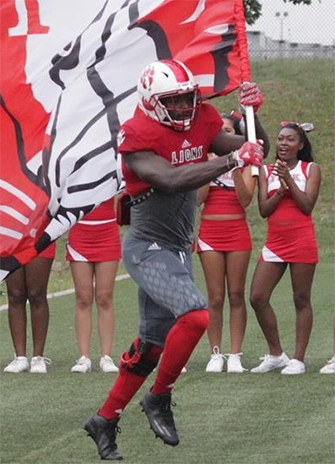 Kick-off is set for 1pm and the game can also be seen live online on OUA.tv. Prior to the game, the team will honour its 13 graduating student-athletes.

It’s been an unusual season in Ontario University Athletics (OUA) football in 2016 and, with two weeks remaining, the playoff picture is extremely murky. At 2-4, the Lions are currently in a four-way tie for the sixth and final playoff spot while the Marauders are tied with three other teams for first place with a 5-1 record.

The Lions have won two of their three contests at home and will need a strong showing on Saturday if they hope to upset the No. 8 Marauders, who are perennial contenders in the OUA and have won three of the last five Yates Cups.

In their two home victories, the Lions put up more than 500 yards and 50 points en route to a pair of wins over teams from the University of Waterloo and the University of Windsor. For the season, the offence has moved the ball well and ranks fifth in the OUA with an average of 465.7 yards per game. The last time the Lions were at home they were defeated by Carleton University by a score of 50-7, and their most recent contest was a road game in Ottawa against the University of Ottawa Gee-Gees that ended with a 54-20 loss.

The Marauders have been stronger on defence and rank fifth in the conference with 366.2 yards per game allowed, as well as leading the OUA with just 11 points per game allowed. In their five wins, the Marauders have given up more than 10 points only once and have a shutout on their resume, a 35-0 blanking of Waterloo in Week 4. Their lone hiccup on the schedule came in Week 3 when they were defeated 30-8 by the Gee-Gees.

York and McMaster are both led by talented starting quarterbacks in Brett Hunchak and Asher Hastings. Hunchak is second in the OUA in passing yards per game (297.2) and fourth in touchdown passes (11), and is averaging 9.1 yards per throw. Hastings was an OUA all-star last season and, while his numbers this year are not as gaudy as they were one year ago, he is still averaging 244.3 yards per game and has eight touchdown passes.

York has a pair of receivers who have dominated this year – Colton Hunchak and Adam Adeboboye. They are third and fourth, respectively, in the OUA in receiving yards (89.5 and 85.8) and are tied for fifth with 5.8 catches per game. Hunchak is also third with five touchdowns.

McMaster’s star on offence is receiver Danny Vandervoort, a Canadian Interuniversity Sport (CIS) all-Canadian and OUA all-star last year who is once again having a strong season. He leads the OUA with 23 yards per catch, by far the highest average in the conference, and is also sixth in yards per game (80.7) and tied for fourth in touchdowns (four).

The last time these two teams met, the Marauders defeated the Lions by a score of 67-10 at Ron Joyce Stadium in Hamilton, Ont.