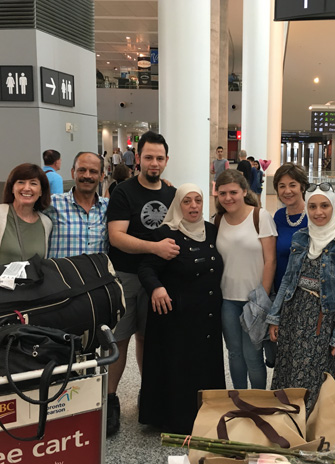 York University’s Project Connect refugee sponsorship team welcomed the University’s first sponsored family through its Syria Response and Refugee Initiative (SRRI). The family arrived in Toronto on July 25. They were met at the airport by members of the Project Connect team.

York University has formed 10 refugee sponsorship teams who will sponsor 41 refugees in total.

Housed at York’s Centre for Refugee Studies (CRS) with significant support from Osgoode Hall Law School, the SRRI coordinates the York community’s participation in the pan-GTA Ryerson University Lifeline Syria Challenge (RULSC). The initiative is also highlighting other forms of refugee support and activism within the University.

Teams in the RULSC challenge have committed to fundraising and managing the necessary funds to support Syrian refugees and provide settlement support for up to one year upon their arrival in Canada.

York University Osgoode Hall Law School alumnus Jeff Galway (LLB ’86) is a lead participant in Project Connect’s sponsorship effort. Galway said that he believes that as Canadians, we have so much to be thankful for: “Our entire group felt it was important to do what we could to assist others who are less fortunate than we are.”

Project Connect also include two members of York student group RefugeAid, who will offer interpretation and social support. RefugeAid has been active within the University community since 2012, organizing events and educational seminars to raise donations for refugee support and spread awareness within and outside the York campus.

Experiential learning for university students is one of the core elements of the RULSC program, though it is a strong sense of empathy and a desire to support refugees that drive their participation. “What really motivates me to help these individuals is placing myself in their shoes. I remember feeling lost in a country that speaks a different language and operates in a different system,” said RefugeAid President Bahar Niazi.

Galway said he has been particularly impressed by the collaboration across Toronto’s universities.

“Universities such as York, Ryerson, OCADU and U of T [the partner schools in this project] are playing a significant role in assisting with the resettlement of Syrian refugees,” said Galway. “Assisting a Syrian family to begin a new life in Canada has been a truly rewarding experience.”

Reflecting this pan-University collaboration, Yara, a second year Ryerson student in Early Childhood Studies has been an invaluable contributor to the Project Connect team.

To date, Project Connect has been assisting the sponsored family by connecting them to basic services such as health and dental care and in securing access to English as a Second Language (ESL) classes, which the family’s four sponsored members began at the start of September. Project Connect was able to secure housing in advance of the family’s arrival. Thanks to a family member that brought their case to the attention of project partner Lifeline Syria they were also able to stock the house with familiar foods and supplies ahead of time.

CRS Director Jennifer Hyndman said she is proud of the Centre’s role in this initiative. “The Centre for Refugee Studies is pleased to host SRRI; with some 30,000 Syrian refugees already resettled in Canada since last November, it’s now York’s turn to contribute to this surge of support by groups across the country,” said Hyndman.

SRRI Project lead John Carlaw described the efforts of Project Connect and other sponsorship teams as “truly inspiring” and “exemplary.”

“I had the honour of being at the airport with Project Connect members and to help drop off their luggage when the family arrived, and the level of preparation and support by the sponsor team was really impressive,” said Carlaw. “It was also very touching to see the sponsored family reunited with a loved one after several difficult years apart.

“While the UNHCR and the Canadian Council for Refugees remind us that the need for sponsors and for refugee resettlement is huge and remains unmet, it is heartening to see so many members of the York and wider community step up to support refugees in this direct way,” he added.

With six more York team-sponsored refugees anticipated to arrive in October and several more in the coming months, York University teams continue to fundraise to support the Syrian refugees they are sponsoring to come to Canada.