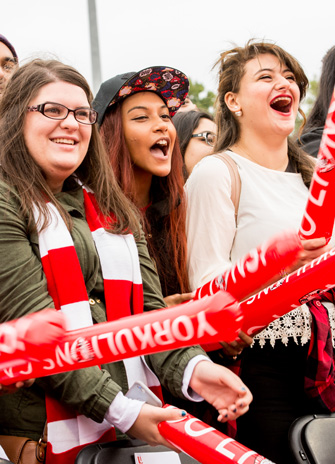 One could say that Red & White Day 2016 at York University was a hat trick because it achieved three spectacular feats in one day.

The first was the “everywhere” presence of red and white as enthusiastic students, faculty and staff donned their York gear and took part in a widespread celebration of the University.

The second was the dedication of Red & White Day 2016 to celebrate Impact: The Campaign for York University, which recognizes the achievements of York University’s students, faculty, staff and alumni who are making an impact that begins locally and resonates globally.

The third was the triumphant return of celebrated YouTube personality and York alumna Lilly Singh (BA ’10) to her alma mater. Singh, aka IISuperwomanII, was at the University for the lunchtime spirit rally just days after meeting America’s First Lady Michelle Obama to discuss her efforts to break girl-on-girl hate through her #GirlLove challenge.

This year’s spirit rally was held for the first time in the York Lions Stadium (the former home of the PanAm/Para PanAm Games) on the Keele campus. Emcees Angelica Grospe, president of the Winters College Council, and Jordan Madeira, vice-president of campus life for the York Federation of Students, kept the crowd energized and dancing to music provided by VIBE 105.5. Performances by the Winters College a Capella group WIBI and the York University Hip Hop Dance group heightened the mood. Red and white scarves were tossed into the crowd by York volunteers who got the students warmed up for the special guest speakers.

The first to speak was York University President & Vice-Chancellor Mamdouh Shoukri. “This day is all about pride and we have so much to be proud of,” said Shoukri. “Today, we celebrate the impact of the entire York community. That includes each of you – our faculty, staff, and students – who are progressive, diverse, ambitious and changing the world, each and every day.

We are so proud of you and we want to help you to continue pushing boundaries, exploring the unknown and making the most of your experience at York University,” said Shoukri. “We recently launched an ambitious campaign to raise $500 million to support your work and to help accelerate your impact, both here on campus and around the world.”

He asked students to look around at the new buildings, the stadium and the subway (which is set to open in the near future). “We face an exciting future, and I am thrilled that you’re all here to show your spirit and share your impact,” he said. “I hope you are inspired today by the incredible things that your colleagues are up to here at York and I hope you are encouraged to reach out and ask each other about your own stories.”

Next to speak were Barbara Crow, dean of the Faculty of Graduate Studies, and Janet Morrison, vice-provost students, who introduced Olympic athletes Khamica Bingham and Arthur Biyarslanov and congratulated the York University tennis team for the Canadian Interuniversity Sport championship. The last to speak was Lesley Beagrie, associate professor, Faculty of Health, who introduced, to wild cheers, Singh.

An Indo-Canadian YouTube personality, vlogger, comedian, actress and rapper, Singh, who is better known by her YouTube username IISuperwomanII, has experienced phenomenal success. Since beginning her channel in October 2010, her videos have received over 1.4 billion views, and her channel has accumulated over 9.8 million subscribers.

She was declared by People magazine as being “one to watch” and in 2016, she was ranked eighth on the Forbes magazine list of the world’s highest paid YouTube stars, earning a reported $3 million in 2015. She was also recognized by Forbes as being one of the top 30 under 30. Her accolades to date include an MTV Fandom Award, a Streamy Award and two Teen Choice Awards.

Singh spoke to the cheering crowd about her delight in being back on campus, noting that those who initially questioned her choice of universities should take note of her enormous success. She talked about being back on campus and having a chance to revisit old haunts and favourite places.

“Since graduating, I have had a pretty crazy life, I have had the privilege of doing some wonderful things,” she said, listing her billion YouTube views, a recent visit to the White House, her meeting with rapper superstar Drake, her friendship with The Rock (aka Dwayne Johnson), and giving voice to a pair of unicorns in the popular animated movie Ice Age.  But one of the coolest things she said was being able to use her celebrity status to advance a campaign to end girl-on-girl hate, which she called the #GirlLove challenge.

She challenged the students to adopt the #GirlLove attitudes to defeat girl-on-girl hate, which Singh said she experienced in high school and thought was a normal part of life. Girl-on-girl hate and suppression of girls and women is a global issue, said Singh.

“Horrible things happen to women in the world. They can’t go to school, they are forced into work at an early age, they are abused,” she said. “Girl-on-girl hate needs to end and everyone needs to come together.”

There are three ways to spread #GirlLove, said Singh, including turning jealousy into a compliment, supporting other women, and making a special effort to make others feel welcome. “Instead of getting bitter, get better,” she said. “Women do face unique issues and gender equality issues affect everyone.”

At the end of her remarks, Singh was presented by Shoukri with a York University jacket emblazoned with #GirlLove on the back, a gift that obviously thrilled her. She then went on to record one of her famous Vlogs (video blogs) in which she took her international following of viewers for a video tour around the campus.

In addition to the spirit rally, Red & White Day included an Alumni Breakfast for grads working on campus. Students were treated to a breakfast courtesy of the York Federation of Students. The University Bookstores offered deep discounts and bargain prices on York gear and memorabilia.

There were free red and white donuts, giveaways, button making and a photo booth where York U students, faculty, and staff could write a motivational message about their own impact and share it with the world. The student clubs hosted activities ranging from coffee houses to manicures, and there were a variety of food trucks at the Keele and Glendon campuses.

Faculty and staff at both campuses got into the festivities through the YU Faculty and Staff Spirit Challenge. Glendon also played host to a Tweetup featuring York’s president and Glendon principal Donald Ipperciel. Glendon students took part in cupcake decorating and DIY mug making.

Twice a year the York community is invited to participate in festivities that celebrate and recognize the people who continue to make the University a success, including students, faculty, staff and grads. Community members are invited to complete a short survey to submit feedback to organizers on the event. The survey can be found at https://www.surveymonkey.com/r/MMDH9DG.