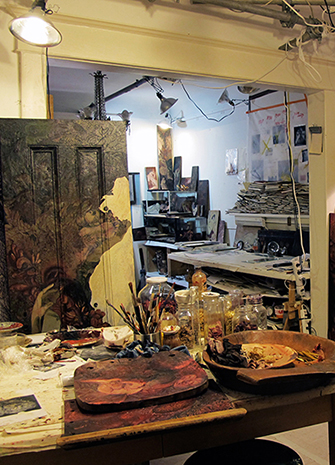 The Art Gallery of York University will launch its new exhibition by Toronto artist Iris Häussler titled, The Sophie la Rosière Project,  tonight (Sept. 14). The launch features gala celebration in the AGYU’s space on York University’s Keele campus. The event, which is free and open to the public, runs from 6 to 9pm.

The Sophie la Rosière Project features paintings by Häussler who trained as a sculptor. After teaching herself how to paint, Häussler produced the complete oeuvre of unknown French artist Sophie La Rosière who died in 1948. As part of her artistic process, Häussler has created an artistic persona (a heteronym) through which to channel this fictitious artist’s secrets while, at the same time, fabricating a biography for her and an elaborate back story of a hidden erotic liaison that intersects, with real people, historical events, and actual artistic movements. Häussler’s immersive installations revolve around fictitious stories. Beginning with detailed biographies of invented characters, she builds the material evidence of their obsessive lives and works. The result is site-specific, unsettling environments in domestic dwellings, historical houses and museums.

Häussler calls her project a Gesamtkunstwerk, a total work of art—and it is more than all-consuming of the artist Häussler herself, and a life’s work La Rosière, too. The painting is merely a kernel within the larger shell of La Rosière’s life circumstances, which includes the recreation of her studio, its products and detritus, and also the elements of a forensic investigation that tries to answer the questions, after the paintings’ discovery, of why these paintings were abandoned, why they were concealed by a layer of black encaustic, and, ultimately, what secrets do they conceal?

Häussler also calls her project a novel in three dimensions because the story unfolds over time and through its various material means—with surprising plot twists. Coincidentally, the story reveals itself tentatively over three different sites in Toronto.

At the AGYU, La Rosière’s mystery is encased in her abandoned studio with its encaustic-obscured paintings. At Scrap Metal (on display Sept. 21 to Dec. 17), the forensic investigation continues. The display there includes x-rays of paintings undertaken by the Centre de recherche et de restauration des musées de France ( C2RMF laboratory), the official investigator in the project, as well as testimonies by and interviews with various French officials on the historical, artistic and psychological circumstances of La Rosière’s life. Finally, La Rosière’s paintings are unveiled and their hidden subjects revealed in the restoration of the works exhibited at Daniel Faria Gallery, spring 2017.

Notable projects by Häussler include The Legacy of Joseph Wagenbach (Toronto, 2006) and He Named Her Amber (The Grange, Art Gallery of Ontario, Toronto, 2008). Visitors form their own meanings and interpretations of the lives of Häussler’s characters by piecing together the clues and content they receive from the artifacts. Because Häussler is interested in the fragile boundaries between fiction and reality, she often does not immediately reveal that her installations are contemporary artworks. Visitors often later refer to their experience as “walking through a novel in three dimensions.”

Toronto-based, Häussler was born in Germany and trained at the Academy of Fine Arts in Munich (1983-1990). She was a stipendiary of the Kunstfonds (Bonn) and won the Berlin Karl Hofer Prize in 1999. She has exhibited internationally, notably at SITE Santa Fe (2012) and the 18th Biennale of Sydney (2012). Häussler was York University’s 2014 Louis Odette Sculptor in Residence.