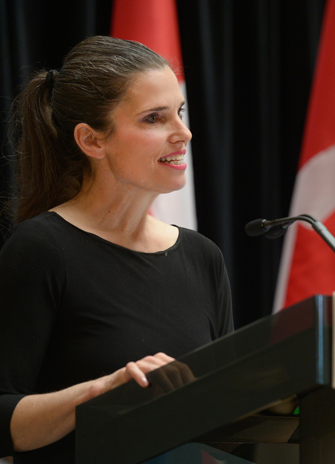 Minister of Science Kirsty Duncan paid a visit to York University’s Keele campus on Friday to announce $163 million in Social Sciences & Humanities Research Council of Canada (SSHRC) funding to support important research across Canada. Forty-four research projects at York University will receive a total boost of $7 million of the federal funding, including $2.5 million for a unique project that looks at migration resiliency in urban Canada.

“Social sciences and humanities researchers help us to understand issues affecting our daily lives and provide evidence for sound policy-making. The Government of Canada believes that only this broad and holistic approach can lead to true discoveries, innovation and solutions that will help all Canadians, including those who now call Canada home,” said Duncan.

York University geography Professor Valerie Preston in the Faculty of Liberal Arts & Professional Studies, will receive nearly $2.5 million in funding over five years through the SSHRC Partnership Grants program plus an additional $1.2 million in partner contributions for a total of $3.7 million.

“York has been ranked among the top 100 universities in the world in the humanities and social sciences, so it is wonderful that SSHRC is recognizing the leadership of our researchers with this funding,” said York University President and Vice-Chancellor Mamdouh Shoukri. “We are particularly delighted for Valerie Preston, whose research in migration and settlement is contributing to York’s leadership in that field, for York researchers who have received funding through the Insight Grants and Partnership Development Grants Programs, and for our graduate students, who have also received substantial support.”

As Robert Haché, York University’s vice-president research & innovation, said “SSHRC’s investment in research excellence in the social sciences and humanities at York University, as well as their support for the next generation of scholars and discoverers, are an affirmation that York University continues to distinguish itself in the breadth and impact of its scholarship, generating knowledge with real-world impact across a full range of disciplines. I want to congratulate today’s award recipients and wish them every success as they move forward with their research programs.”

Preston, is the lead researcher for the study “Migration and Resilience in Urban Canada: Discovering Strengths and Building Capacity”. Her team will do a comparative analysis of resilience among migrants settling in two of Canada’s major immigration gateways – Toronto and Montreal – as well as large and small municipalities in Ontario and Quebec, and central and suburban locations in Toronto.

“One of the goals of the study is to look at how to improve settlement outcomes and to enhance well-being in the face of economic, political, social and cultural challenges. But also, to pilot strategies that facilitate the efforts of social institutions to promote resilience,” said Preston.

The research team will examine how social institutions influence resilience and boost migrants’ capacity to settle successfully in Canada. The project was developed in collaboration with CERIS, Ontario’s leading migration studies network, and includes 18 partners from Canadian universities, community-based NGOs, and municipal, provincial and federal government departments and agencies.

Three York researchers also received $573,391 in funding under the Partnership Development Grants Program to foster new research and related activities with new or existing partners, as well as to design and test new partnership approaches.

A complete list of the SSHRC funding grants can be found at http://bit.ly/2cccwbV.