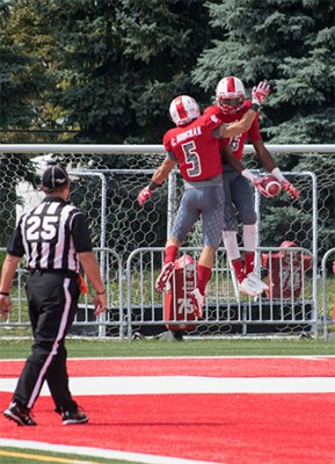 The York University Lions football team is at home in Week 3 and welcomes the University of Windsor Lancers to campus on Saturday afternoon (Sept. 10) for its FanFest game.

Kick-off is set for 1pm at Alumni Field and the game can also be seen live online on OUA.tv.

Saturday’s contest pits a pair of 1-1 teams who have had similar showings to start the season. The Lions began with a huge win over the University of Waterloo Warriors but suffered a lopsided loss in Week 2 to the No. 9 nationally ranked Wilfrid Laurier University Golden Hawks, while the Lancers also have a big loss and a win on their record.

The last time the Lions were on home turf, they posted a huge 57-13 victory over the Waterloo Warriors in their season opener two weeks ago, thanks in large part to the strong play of starting quarterback Brett Hunchak. The second-year pivot threw for 331 yards and five touchdowns en route to being named the Ontario University Athletics (OUA) and Canadian Interuniversity Sport (CIS) offensive football player of the week.

Overall, the Lions racked up 550 yards of offence and found the end zone eight times in that contest. They had a tougher time last week, falling by a 74-3 score to the Golden Hawks in a game that was within one score until late in the first half before Laurier poured it on in the second.

The Lancers, meanwhile, have also given up 70-plus points once this season, going down by a score of 78-6 to the nationally ranked Western University Mustangs on the road in their opener. However, they rebounded in a big way on Monday afternoon, posting arguably the biggest upset of the young season by defeating the defending Yates Cup champion, the University of Guelph Gryphons, 33-29 at home.

The two squads did not meet last year other than an exhibition contest in August. Their most recent OUA match came in 2014, when the Lancers earned a 35-3 victory over the Lions also at York.

The Lions will rely on the strong play of Hunchak and also his brother, receiver Colton Hunchak, in order to move the ball against the Lancers. He has amassed 188 yards on nine catches, ranking fifth in the OUA in total receiving yards, and also has a pair of touchdowns on the year.

Windsor’s offence has been led by running back Tarrence Crawford, who ranks fifth in the OUA with 177 yards on 34 carries and has scored one touchdown.

The Lancers will also count on linebacker Frank Renaud, who is the current OUA defensive player of the week after picking up 10.5 tackles and a forced fumble against Guelph.

In addition to the exciting action on the field, there will be plenty happening for the fans as well, including several contests and giveaways, inflatables and more. Tickets can be purchased online at yorkulions.ca/ticketing or at the gate on arrival.