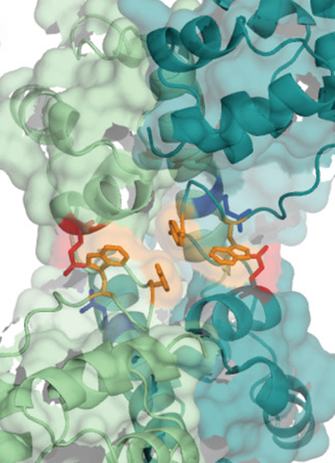 Biology Professors Logan Donaldson and Vivian Saridakis in the Faculty of Science and Georg Zoidl in the Faculties of Science and Health have uncovered new structural details about a brain cell signalling protein called CASKIN2. The findings, available in the journal Cell Communication and Signaling, offer insights into how this protein plays a role in neurotransmission.

The brain is made up of billions of neurons that transmit signals to each other via specialized connections called synapses. This communication requires large groups of proteins to organize and work in tandem. The CASKIN family of proteins helps to do this by acting as scaffolds that glue other proteins together.

“CASKIN proteins are like the socialites of the party, enticing other proteins to cluster around them,” explains Donaldson. “While we already know a bit about CASKIN1, little research has been done to understand its related protein CASKIN2’s structural and functional distinctions.”

Donaldson and his multidisciplinary team used nuclear magnetic resonance spectroscopy and x-ray crystallography to take a closer look at CASKIN2, specifically the location of its two protein-binding domains called sterile alpha motifs (SAM). With the help of international collaborators from King Abdullah University of Science and Technology (Saudi Arabia) and University of Texas Health Science Center at San Antonio (USA), they determined the x-ray structure of the motif region and found that the two SAMs interacted with each other differently than they do in CASKIN1.

The results suggest a novel way in which neuronal SAM domains might concentrate and amplify synaptic responses. The next step will be to identify the proteins that bind to the SAM domains of CASKIN2.

“Neuronal signalling is an adaptable and dynamic network, and by studying the proteins that play a role in this network, we can better understand the basic aspects of learning and memory and how mental health disorders might arise when they are compromised,” says Donaldson.