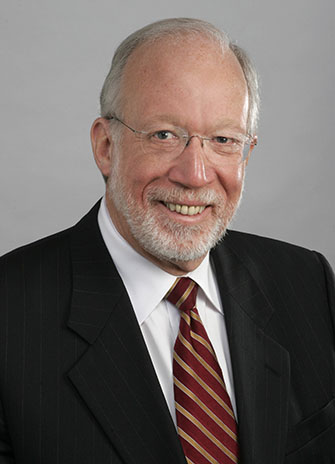 Professor Kenneth McRoberts, former principal of York University’s Glendon College, has been named to France’s National Order of Merit and appointed to the rank of knight.

A ceremony on April 25 at the French Consul General’s residence in Toronto confirmed the appointment, which recognizes distinguished civil and military achievements. The National Order of Merit was founded in 1963 by President Charles de Gaulle.

In 2004, the French government had already named McRoberts to the rank of officer of the Order of Academic Palms, a national order for notable academics and figures in the world of culture and education.

Marc Trouyet, the Consul General of France in Toronto, said McRoberts had become “a leading figure in Canada’s and Ontario’s Francophonie.”

Among his many accomplishments, McRoberts was recognized for expanding Glendon’s academic programs and making improvements to its facilities during his 15-year tenure as principal. Furthermore, McRoberts reinforced Glendon’s relations with France, most notably through the establishment of dual master’s degrees with the University of Strasbourg.

The Consul General further acknowledged that McRoberts had been “a key promoter of French-language education across Canada,” having served as president of the Association des universités de la francophonie canadienne.

As principal, he had been instrumental in the creation of the school which builds on Glendon’s mission of preparing bilingual leaders for Canada’s public life. After completing his tenure as principal in 2014, McRoberts assumed the directorship of the Glendon School of Public & International Affairs. He left the directorship in June, and is now preparing new editions of two books he wrote prior to assuming the position of principal: Misconceiving Canada: The Struggle for National Unity and Catalonia: Nation-building Without a State.

McRoberts received an honorary doctorate from Laval University in 2004 for his scholarly achievements. He was awarded the Ontario Francophonie Award by the Ontario government in 2010 and the Queen Elizabeth II Diamond Jubilee Medal in 2013.