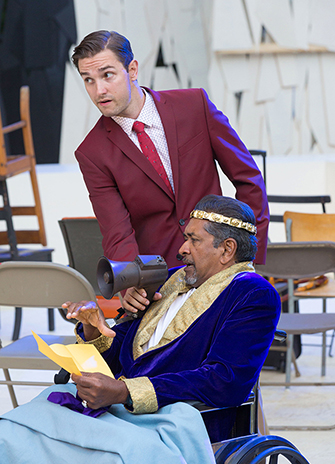 Theatre student Kyle McWatters (standing) is thrilled to perform the role of Dumain (2) in All’s Well That Ends Well. Pictured with Marvin Ishmael as the King of France. Photo by Cylla von Tiedemann

From a wildly funny fairy tale to a searing battle for justice and revenge, York University theatre students, faculty and alumni are contributing their talents to Canadian Stage’s 34th annual Shakespeare in High Park (SiHP).

Since 2012, Canadian Stage has teamed up with the Department of Theatre in York’s School of the Arts, Media, Performance & Design to produce a double dose of summer entertainment: two plays featuring the same actors and different directors. This season, Shakespeare’s great tragedy Hamlet and the bold romcom All’s Well That Ends Well are playing under the stars in Toronto’s High Park Amphitheatre on alternating nights throughout the summer. The shows opened last week to critical and audience acclaim.

Above and beyond sewing, building the costumes involved searching out existing pieces and patterns in York’s extensive collection and adapting them to the costume designers’ sketches. The students sourced appropriate fabric, made stylistic adjustments, and fit the sizing for the actors.

While the production students already had several Theatre @ York mainstage shows under their belts, SiHP was the most complex costuming project that devised theatre student Berardocco had ever taken on.

“I’m a do-it-yourself theatre-maker, and in York’s program I’ve been able to develop hands-on skills in all areas, from tech and performance to creation and direction. I know this costuming experience will help me down the road,” she said. “For SiHP I’ve built a suit jacket from scratch. I’m so excited to see my creation on stage!”

Under the direction of Assistant Lecturer Sylvia Defend, the wardrobe shop in York’s Theatre Department offers such a welcoming creative environment that production student Hannah Litster and freshly minted alumna J.J. (Jingjia) Zhang (BFA ‘16) volunteered to assist with the project.

On the performance side, Canadian Stage offered a remarkable opportunity to members of York’s Fourth-Year Acting Conservatory by holding a special audition on campus last November. A small group of students was invited to the open casting call downtown the following month, and Raechel Fisher and Kyle McWatters were each offered supporting roles in the SiHP productions.

“It was so great to get the callback,” said McWatters. “While I felt excited and prepared for the auditions, it was such a thrill to land the parts. On my first day of rehearsal I was nervous, but knowing what a great program York has, and knowing exactly what was expected of me, helped me focus.

“These shows are a continuation of my in-class experience,” McWatters added. “I’m learning so much from the rest of the SiHP cast and the directors. In my third and fourth year at York, the directors we worked with really treated us like professionals. They and our profs were warm and caring people and amazing mentors, and working with them was the perfect introduction to a career in theatre.”

Learning two plays at once can seem like an intimidating challenge, but McWatters sees his class work as a foundation for success.

“At York, they keep you on your toes,” he said. “I always had a number of projects on the go, so memorizing and rehearsing two plays at once feels natural.”

Audience feedback has been gratifying, McWatters said. “I love getting laughs and feeling when the audience is really engaged in the play. My friends and family have been super supportive. And I’m especially excited for my profs to come and to hear what they think after the show.”

Helming All’s Well is Ted Witzel (MFA ’14), who was one of the two inaugural graduates of York University’s Graduate Program in Theatre – Stage Direction in Collaboration with Canadian Stage. (No stranger to SiHP, Witzel’s first summer production with Canadian Stage was directing The Taming of the Shrew for his MFA thesis.) Alumnus Simon Fon (BA ’16) is the fight director for both plays.

These ongoing and new connections build on the strong relationship between one of Canada’s foremost contemporary theatre companies and leading theatre schools.

“The Doras were a perfect night. It was wonderful to see so many alumni recognized for their talents,” said Ines Buchi, chair of York’s Department of Theatre. “Now I’m looking forward to seeing the work of our young artists and colleagues at Shakespeare in High Park, and to our continued partnership with Canadian Stage for the excellent experiential education and mentorship they provide to our students.”

SiHP runs to Sept. 4. Admission is free for children 14 and under. Adults are invited to make a pay-what-you-can donation at the entrance ($20 min. suggested) or to reserve a premium spot in advance via an online $25 donation. For details, visit the SiHP website.