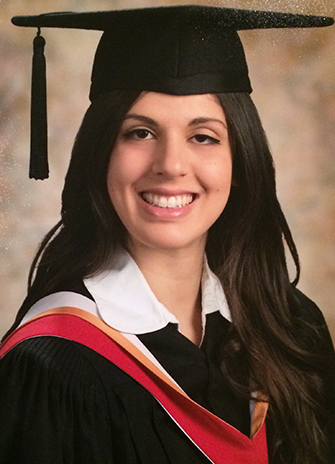 The medals are presented to undergraduate students with outstanding scholastic achievements. Catherine received hers for having the highest average in the sciences. She also graduated First Class with Distinction and is a three-time recipient of the York University President’s Scholarship.

As she reflects back on her time at York, one of her fondest memories revolve around teaching fitness classes on campus at Tait McKenzie.

It was at York that she also discovered her passion for medicine. After taking a breadth of science classes in her first and second years, she found that courses in health and wellness, such as kinesiology and psychology, excited her the most and that it was inevitable she would one day become a physician.

“I specifically enjoyed a course I took in my fourth year that focused on exercise physiology for chronic diseases,” says Spagnuolo. “It made me think about how chronic diseases are connected to healthy living, and that there are a variety of ways of managing chronic conditions, including through movement and exercise.”

She explains that her ambition as a future physician is both to treat patients who are sick and to keep healthy patients as healthy as possible for as long as possible.

Aside from being a solid-A student throughout her degree at York, Spagnuolo also volunteered at Mount Sinai Hospital. She worked in the audiology department, in particular assisting with the infant hearing program, and most recently she also began volunteering in the cardiology clinic.

She will continue her volunteer work throughout this summer as she prepares to begin a master’s degree in epidemiology at Queen’s University this fall.