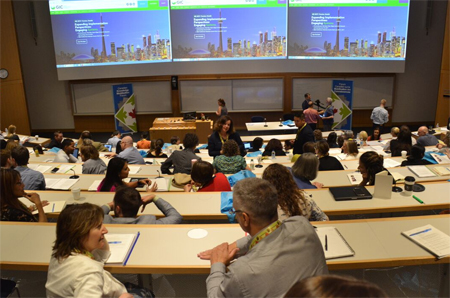 Participants gathered for the forum, which was hosted by York University

By all standards this was the largest and most comprehensive gathering of knowledge mobilization scholars, students and practitioners in the world, said David Phipps, executive director of research and innovation, York University.

York University hosted this year’s forum as part of the 10th anniversary celebration of York’s Knowledge Mobilization Unit, which located in the Office of the Vice-President Research & Innovation.

The forum, the only venue in Canada and the largest in the world, brings together the scholarship and the practice of knowledge mobilization across all disciplines. Some 232 registrants attended the forum, which had more than $50,000 in sponsorship. Participants came from across Canada and the United States, and from the United Kingdom and Switzerland. The hashtag #CKF16 trended on Twitter in Canada on both June 28 and 29. There were some 80 presentations, performances and posters.

“Michael Johnny and his entire team put together an exemplary program of content describing knowledge mobilization research, practice, theory, methods and tools,” said Peter Levesque, president of the Institute for Knowledge Mobilization. “The outstanding response from the Canadian and global community is a result of Michael’s leadership this year and reflects York’s leadership over the last 10 years.”

Examples of knowledge mobilization research and practice shared at the forum came from research areas that included mental health and addictions, agriculture, the Arctic, Aboriginal issues, gambling, education, housing, social services and many other disciplines. Representatives shared their stories, tools and methods they used to maximize the economic, social and environmental impacts of research.

The Canadian Knowledge Mobilization Forum was started in 2011 by the Institute for Knowledge Mobilization and has since been hosted in Ottawa, Mississauga, Saskatoon and last year in Montreal drawing 172 registrants. Next year the forum will return to Ottawa as part of celebrations to mark Canada’s 150th anniversary.