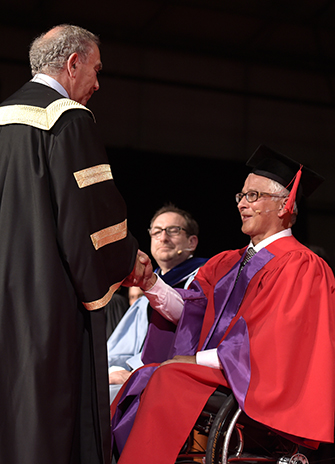 A partner with Farris, Vaughan, Wills & Murphy LLP in Vancouver who holds law degrees from Western and Harvard universities, Arvay is known for litigating cases on fundamental freedoms, access to justice and indigenous rights, equality, principles of fundamental justice, and the limits of police and state authority that have reshaped the legal and policy landscape. He has been counsel in a number of important Supreme Court of Canada cases, some of which include the same-sex marriage reference, the Little Sisters bookstore trial and Carter v. Canada (AG) in which the Supreme Court struck down the ban on physician-assisted suicide.

He was at York University to receive an honorary doctor of laws degree in recognition of his exceptional commitment to human rights in this country, which has been recognized with numerous awards and honours, including the Advocate Society’s Justice Award in 2015, the Trial Lawyers Association of British Columbia Bar Award in 2009, the Reg Robson Award from the British Columbia Civil Liberties Association in 2005 and the Walter S. Tarnopolsky Human Rights Award in 2000.

“This is a very special day for all of you,” Arvay said. “It is the end of three hard years of law school and for that reason alone, it is a cause for celebration. But it is truly only the beginning of a much longer journey. Each of you will experience that journey in different ways. Some of you will be trial lawyers, some of you will be solicitors, and some will follow in the criminal law and others in civil litigation. For some of you, your path might be outside the law, perhaps in politics or government, journalism or business.”

“The legal education that you have received from this great law school will put you in very good stead to have a prosperous and fulfilling career,” he said. “In my view, that education also impresses upon you some very important obligations. You are all now part of a very privileged group of Canadians. You are, or will likely be, privileged with money, but perhaps more importantly, you are privileged with knowledge, power and with ability. In a sense you have a duty – not just a moral duty, but a professional duty – to share your privileges with those less fortunate.”

One way graduates can share their abilities is by providing their services pro bono. Arvay spoke from experience, as many of the pivotal cases he has argued were for the public good, taken voluntarily and without payment. “It was by doing pro bono work that I was able to help many disadvantaged groups make significant social gains over the course of my career,” he said.

He spoke about a number of key cases, including Egan v. Canada (1995) in which Arvay was counsel for the plaintiffs James Egan and John Norris Nesbit. The case established that sexual orientation constitutes a prohibited basis of discrimination under the Canadian Charter of Rights & Freedoms.

Arvay talked about his work defending high-profile cases, such as the Little Sisters bookstore trial, where he argued gay, lesbian and transgender rights in the context of freedom of speech; and Chamberlain v. Surrey School District No. 36, where he successfully argued that a local school board could not impose its religious values by refusing to permit the use of books in kindergarten and Grade 1 that sought to promote tolerance of same-sex relationships.

“Such activities are personally and professionally enriching,” said Arvay. “It is also to tell you that without the work of pro bono lawyers – and there are many of us in Canada – none of these cases would have been possible. None of these socially progressive gains would have occurred because there is no legal aid for constitutional cases in Canada. Even if the government brings back the court challenges program, it will never provide the kind of funding that these cases demand if lawyers were actually to charge a fee based on the time spent, which can be thousands of hours.

“I tell you about these cases because I believe it is our role as lawyers to take on cases like this if we want to advance social justice in Canada, because if we wait for politicians to do so, it would not otherwise occur or occur in a timely manner,” he said.

A perfect example of that reality, he said, are two of his present pro bono cases. The first one is focused on striking down the laws that allow for indefinite solitary confinement in Canadian prisons. The practice has often been likened to torture, said Arvay, who described extended and indeterminate solitary confinement as being certainly cruel and unusual – terms that are used in the law. “Prisoners remain one of the most vulnerable groups in our society, having no political power, and while the crimes they have committed may warrant imprisonment, it should never justify indecent and inhumane treatment,” he said.

“You may have all heard that one of the priorities of the new government was to implement the recommendations of the coroner’s jury in the Ashley Smith case, which was to abolish solitary confinement for the mentally ill and otherwise place a strict cap the number of days in any one time it is used.” A mandate letter went from the prime minister to the attorney general of Canada and the recommendations have not yet been implemented, said Arvay with frustration evident in his voice. “That mandate has not yet been carried out and it seems it will take a court challenge to make the government live up to its promise, even a government that claims that sunny days are with us.”

The other case involving Arvay’s co-counsel will seek to limit the ability of security agencies to gather information, emails, and the collection and analysis of metadata without a warrant.

There’s no shortage of injustice in the world, even in Canada, said Arvay. “There are many other cases that await you. Some will come to you and others you can seek. The lack of clean water on First Nations reserves is a scandal. Suicide rates among indigenous youth are tragic. Disabled people continue to experience extremely high rates of unemployment and discrimination. Transgendered people are experiencing insidious prejudice and even hate. Drug addiction remains a scourge. People with mental illness are being imprisoned instead of receiving treatment. Wrongful convictions remain a reality, and climate change threatens our existence.”

Arvay’s work made headlines when the Supreme Court struck down the ban on physician-assisted suicide in the Carter v. Canada (AG) case. Arvay said that he anticipated that case would be a culminating point in his career. Unfortunately, he said, the government’s decision not to comply with that decision has been very disappointing. “The government’s choice to enact a law that was called Bill C14 – that in my opinion is flatly unconstitutional in denying the right to die with dignity for those individuals who are suffering intolerably from horrific diseases, illnesses or conditions, but whose natural deaths are not reasonably foreseeable – that was not a condition imposed by the Supreme Court of Canada in the Kay Carter case. It is a condition that is contrary to the decision in Carter itself!

“It condemns those whose death is not immediately foreseeable, but who are suffering, to experience that suffering the most and for the longest period of time to be without a remedy,” he said, noting the government changed its messaging from claiming the bill was congruent with the Supreme Court decision in the Carter case to now conceding it is not, but somehow consistent with the charter.” He finds this change in messaging to be very odd and he anticipates he will be back in court arguing challenges to C14.

“As law graduates, you have all been imbued with the metaphor that our constitution is a living tree capable of growth to reflect changing societal values, norms and developments,” said Arvay. “It is a complete denial, and perhaps a perversion, that Parliament can enact a law that far more restrictive of the rights and freedoms recognized by our highest court and claim that it is nonetheless consistent with the charter. Our living tree is the majestic maple, not a stunted bonsai, so we will likely be back in court to challenge this law. So much for my retirement!”

The point of his comments, he said, was not to vent, but to impress upon graduates that the fight to ensure that society is committed to the rule of law and constitutionalism is a never-ending one.

“This is what we as lawyers are trained to do, this is our collective mission, and this is our duty,” he said. “The journey you take will be for you to decide, but I would like to think that you see, as your ultimate destination a career that allows you to use your legal skills to make our society a more just and humane one.

“You have choices to make, but I ask you to always ask yourself this question as you proceed in your careers: ‘Am I doing noble work?’ ”

In closing, Arvay asked grads to think boldly, push the envelope of the law, be courageous and take on cases that others say are hopeless. “If your cause is just then the matter is worth pursuing,” he said. “Even if you are not victorious, you are not necessarily unsuccessful, because the legal process is a way in which you can raise awareness about the plight of the disadvantaged and the marginalized.”