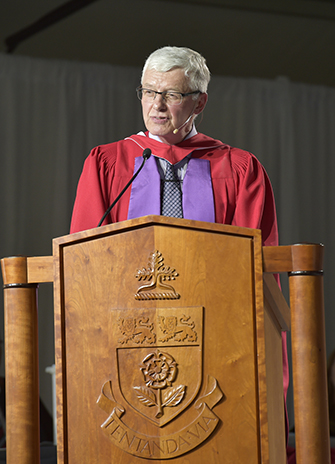 During the final ceremony for York University’s Spring Convocation, graduands of Glendon College heard sage words of wisdom about the importance of public service from prominent Canadian Kevin Lynch on June 25.

Lynch, the vice-chairman of BMO Financial Group with a 33-year career history as a distinguished civil servant for the government of Canada, received an honorary doctor of laws from York University.

During his opening remarks, Lynch told graduates that “this degree will pay dividends for the rest of your lives” and urged students to think about their expectations moving forward.

He reflected on Glendon’s significance in contributing to Canada’s bilingualism and multiculturalism. He reminded grads that the first class of Glendon embarked on their studies on the eve of Canada’s centennial – a time, he said, of great optimism across our land.

“Your class,” he continued, “is completing its studies on the eve of the sesquicentennial – a time of global transformation and a mixture of hope and angst felt around the world.”

He described a “new global normal” as a world of hyper-connected globalization with an incredible promise of technological change, and said the only constant is change and the only certainty is that the status quo is not a viable long-term strategy.

“So what of governance in this new global normal?” he posed.

Canadians, he said, fundamentally believe in peace, order and good government; Canadians understand why government matters. But, government can only be as good as the strength of its institutions – the excellence of those who stand for elected office, the quality of its public servants, the rigor of journalists, the interest in business and the engagement of citizens.

Lynch outlined three specific points that graduates should consider in the reality of today’s governance, and pointed to liberal arts as a foundation for shaping leaders – and where that leadership could take Canada.

International governance, restoring trust in Canada’s institutions and a renewed commitment to public service are the keys to build public trust and a robust democracy moving forward, he said.

“We all have a responsibility for the state of governance, it demands ongoing public vigilance and engagement and most importantly it’s going to need the interest of you, the next generation, your enthusiasm, and your will to do it,” he said.

In closing, Lynch shared an observation by George Bernard Shaw on expectations and leadership, who said “You see things; you say, ‘Why?’ But I dream things that never were; and I say ‘Why not?”.

Where is innovation and progress without such dreams, he asked.

“Where might the future of Canada take us with each of you asking ‘Why not’? Where, indeed.”

York’s 2016 spring convocation ceremonies are streamed live and then archived online. Lynch’s convocation address has been added to the archive To view his address, visit the Convocation webcast archive.