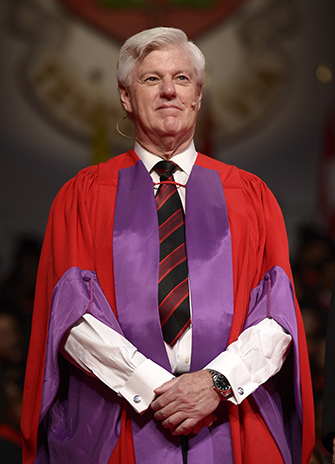 Former deputy prime minister for Jean Chrétien, John Manley, painted a picture on how the world is evolving to the graduating class of York University’s Schulich School of Business during Spring Convocation ceremonies on Friday, June 24.

Manley received an honorary doctor of laws degree from York.

“It is an honour to be among your number,” said Manley while addressing over 600 graduates at York Convocation. “This day is all about you. You have completed your assignments, passed your exams, met your deadlines. You are ready to enter the next phase of your lives and are graduating from a truly great school.”

Manley served as a Liberal member of parliament for Ottawa South from 1988 to 2004. In 2000, he became the minister of Foreign Affairs and was applauded for helping ease the strained Canada-U.S. relations. He was appointed as the minister of Finance in 2003 and his federal budget laid out billions of dollars in new spending, primarily in child care, health care and for First Nations.

In 2009, he was appointed an Officer of the Order of Canada for his contributions to Canadian politics and business. Throughout his career in politics, he recalls one lesson he learned which he feels directly relates to the business world as well.

“You have to stand up to be seen; speak up to be heard; and sit down to be appreciated,” he said.

Now as president of the Business Council of Canada, Manley still follows that lesson, even in a rapidly changing world. In his new position he has a front row seat to many of the new disruptive technologies. He mentions when he started his business career, iPhones were three years away, Facebook was limited to Harvard students, tweeting was what birds did and Über was a German word meaning over.

“We live in a shrinking world, one in which businesses face a constant parade of challenges and competition from new players and technologies,” Manley said. “In business, technological change on a massive scale creates risk and opportunity. It gives rise not only to new competitors, but new business models that challenge the way things have always been done.”

“You, the Class of 2016, graduate during a time of economic challenge but also a time of great promise filled with opportunities in new and emerging industries,” he said. “You are the world’s first truly digital generation, so you will be better prepared than most to navigate the digital revolution reshaping our world.”

The transforming business landscape of today is characterized by “increased complexity, more turbulence and more disruptive technologies and new business models,” added Horváth. “This is the new normal. The only certainty today is constant uncertainty.”

Manley mentioned how Schulich graduates are in a great position to succeed with sharp minds and strong educational credentials, as well as “soft-skills” that employer’s value. As an avid runner competing in marathons, he feels navigating the new world will be similar to a race, with each outcome uncertain so students have to “take responsibility”.

“All of you graduating today have just run a marathon. You never gave up, you never quit, and today you triumphantly cross the finish line,” he said.

York’s 2016 spring convocation ceremonies are streamed live and then archived online. Manley’s convocation address has been added to the archive. To view his address, visit the Convocation webcast archive.