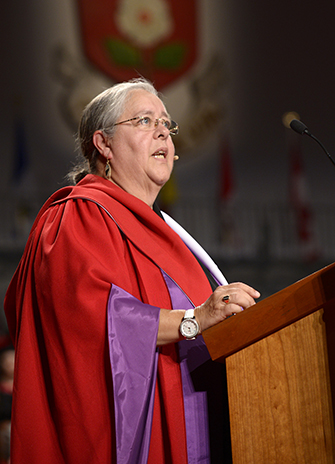 In a very inspirational and timely address, community leader and activist Sylvia Maracle challenged graduates of the Faculty of Education to make a personal commitment to “change the norm” during Spring Convocation ceremonies on June 23.

A Mohawk from the Tyendinaga Mohawk Territory, a member of the Wolf Clan and a passionate advocate for urban Aboriginal Peoples, Maracle received an honorary doctorate of laws from York University in recognition of her years of community service and work for the cultural revitalization of her people and women’s rights.

Maracle shared a little bit about her life-long journey, which she says “began as an Indian from a reserve trying to change attitudes and behaviours, curriculum and teacher training and how the academy reacts to indigenous people,” – and how over time, that journey has led her to “now stand before them as an Indigenous woman who has tried to make some change.”

Citing the recent Truth and Reconciliation Report, she told graduates about a number of recommendations for Canada to improve relations between Indigenous peoples and to “those of you who came to Canada as immigrants” that they could draw upon in their teaching careers.

“In this province in the last few days, we have discovered that behaviors that we have need to be changed, and that those of you who are graduating and are in the audience need to rethink the history that you have been taught, to rethink sociology, relationships, connectedness to each other and to the land, in order to determine what is needed to collectively change the future,” she said.

Maracle told graduates that as a result of the Truth and Reconciliation Report, the Royal Commission increased its multicultural reflection of Canada.

“We have a wave of new immigrants and refugees coming into the country who have never been exposed to Indigenous issues in this country,” she said.  “The experience and current status of Indigenous issues do not just belong to me, they belong to each one of you, so whatever part of the education continuum you gravitate to, it’s evolving. Not just in terms of societal norms and social justice but in addressing the truth of our shared histories.

“How many of you are treaty people?” she asked. “You are all treaty people. You came to this country or you were born here and there were treaties and your ancestors and mine signed them and we agreed to peace and friendship. We didn’t make treaties with ourselves; we made them with you and your relatives. And when you come here, you all come here as a part of that relationship.”

Focusing on the education system as the one that must change the most, Maracle told graduates if we taught ‘our’ history, we would have children and youth and adults who are informed and knowledgeable about the truth about where we come from before they arrive at post-secondary institutions.

“If we have an open dialogue,” she said, “all-be-it uncomfortable, we will create change.”

“Educate yourself first,” she said.

“Here at York you will have learned a number of systems approaches, which have become the norm. That norm in our experiences as Indigenous people indicates the system does not work well for us,” she said.

On that day, she said, they committed all of us to a different future.

“You are part of this different future. You are part of a process to lead change and to change the experience for all learners and for all teachers about indigenous issues, said Maracle.

“As you move forward, remember, one size does not fit all,” she said in closing. “In order to prepare for the future, you need to look critically at how education has worked and have enough courage to be creative and bold in looking at alternative processes. It is important for all of us to make a personal commitment to change the current norm. If we move forward together, each honoring our agreements known as treaties, then our collective children will find a different path than we were taught.”