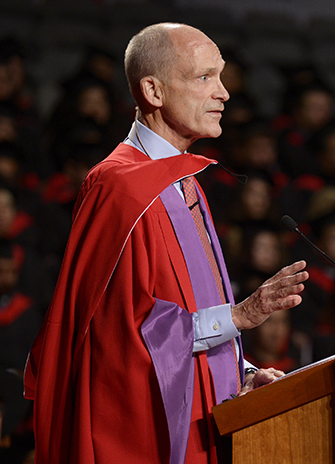 More than 40 years ago, David Denison aspired to be a teacher. Little did he know that those original career plans would change so dramatically, eventually launching him into a series of high-profile positions including his current role as chair of Hydro One.

Denison, the former president and CEO of the Canada Pension Plan Investment Board and a past member of the York University Board of Governors was at York University June 22 to receive an honorary doctor of laws degree from York University during convocation ceremonies for the Faculty of Liberal Arts and Professional Studies.

“Let me first say how deeply honored to receive this honorary doctor of laws degree from York University, one of Canada’s finest educational institutions, and one that I was very proud to be associated with during my eight years on its board of governors,” said Denison. “I was unable to attend either of my own convocations, when I graduated with my BA in 1973 and my BEd the following year, so I am particularly delighted some 43 years later that you have allowed me to participate in your convocation.”

When considering what to talk about in his convocation address, Denison drew on his own experiences and consulted his daughter. Graduation from university for many students, he said, marks the transition from the academic to full-time work phase of their lives. He decided to offer some important insights, which he told grads that he felt would have been beneficial to know at the outset of his own career.

New grads, he said, fall into two groups: those who are feeling confident and secure about their career paths, and those who are unsettled because they are uncertain of where to go next, what they want to do, or how to get started.

“I was definitely in the first category 43 years ago before entering university, I had already decided that I wanted to be a high school teacher. I chose two good teachable subjects, math and English, for my major and minor and saw myself happily progressing from classroom teacher to perhaps department head to possibly a position as a vice-principal or principal over a long career in education,” said Denison.

For the first five years, Denison said he thoroughly enjoyed teaching, but by the end of the fifth year, he realized that he would not be able to maintain the enthusiasm and interest that is so critical to being a good teacher for another 35 years or so.

He took a series of aptitude tests and returned to university to earn the credits he needed to become a chartered accountant. After receiving his designation, he took an accounting job, only to find that the career wasn’t for him. He took a gamble of sorts and landed a position with Merrill Lynch Wealth Management, a choice that launched him into a career that lasted some 30 years and saw him become the the Chair of the Canadian Coalition for Good Governance (CCGG) from June 4, 2009 to June 15, 2011, and a corporate director of since June 23, 2005. Denison has had an extensive career in financial services within Canada, the United States and Europe, with firms including Fidelity Management, Merrill Lynch, S.G. Warburg, Midland Walwyn and Mercer Consulting, the United Way and in 2014 he was named an officer of the Order of Canada.

“So what is the point to my story? When I started out, I thought charting my career was like choosing a major in university,” he said. “I came to realize, it is more like choosing a series of electives. It is about gaining some practical perspective and insight into various alternatives. Importantly, some self-awareness about what truly interests and motivates you and building a foundation of different experiences you can then draw upon to pursue additional options.

“Those electives may eventually lead you to embrace a career ‘major’ and that may happen for some earlier than others. It took me three tries,” he said.

These life ‘electives’ he said may also keep leading to new alternatives and options. “The important thing to keep asking yourself ‘Have I truly found something that will continually interest and challenge me over the long term?”

He urged grads to continue to search and consider until they find something that suits them and not to settle for the mundane or easy. The search won’t ever lead to a dead end as each experience has value, noted Denison. People have asked him if he regretted the years he spent as a teacher. His answer each time he is asked is, “Not in the least!”

Teaching was a great choice and a fantastic experience that contributed a lot to his personal development, said Denison. “I continue to apply the skills I learned in the classroom each and every day in the years since.”

Eighty per cent of success is showing up and actually caring about what you do, he told grads. “People who gain recognition and success don’t just show up. They bring a noticeable measure of enthusiasm, commitment and tenacity to what they do. They take pride in achieving good results,” he said, noting they do the unpleasant aspects of their jobs without complaining and care about what they do.

Another aspect of success said Denison, is to adopt a set of values or principles. “Principle-based people tend to instill a great amount of confidence and trust in others because there is a clear consistency and coherence to how they make decisions and conduct themselves. Their principles provide a ‘true north’ reference point, a beacon that helps them navigate and make decisions when the pressures of work and life can easily blow them off course.”

Principles, he said, work best when they are linked to a guiding behaviour. He implements this action through a commitment to follow through on every commitment and promise so that he can be counted on by those around him.

“I would strongly encourage all of you to adopt your own set of guiding principles,” he said in closing. “I don’t believe there is any set prescription only that they resonate with what is important to you and how you want to conduct yourself and how you want to be known by others.”

He urged grads to write them down and refer to them often and use their principles and values as their own ‘true north’ guiding star.