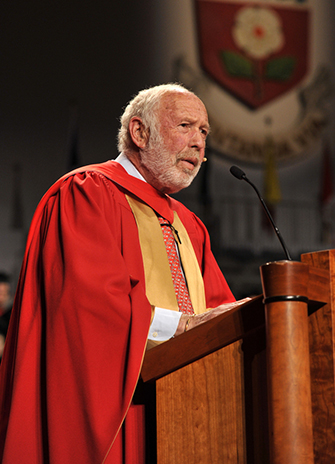 Graduands from Lassonde School of Engineering and the Faculty of Science were reminded during the ninth ceremony of York University’s Spring Convocation that inquiries into basic science are often the ones that change the world.

James Simons, a highly accomplished mathematician, financier and philanthropist, spoke to graduates during the ceremony on June 23. Simons was given an honorary doctorate of science from York University.

A celebrated mathematician who earned his doctorate in the subject at the age of 24, Simons share words of inspiration through meaningful examples in history.

“Basic scientists try to understand the world about them without necessarily thinking to use that knowledge to immediate applications,” he said, citing how Newton invented calculus to better understand planetary dynamics, but couldn’t imagine that calculus would underpin all of engineering.

Darwin, too, didn’t know that his discovery of evolution would underpin all of biology, and ultimately most of medicine.

“Thing about basic science is, you don’t know really where it’s going to go, but you can hope that it’s going to go far,” said Simons, who is chair of the Simons Foundation, an organization dedicated to advancing the frontiers of research in mathematics, basic sciences and the causes of autism.

He, himself, was a small example of this, he told students, when he and mathematician Shiing-Shen Chern developed the Chern-Simons form – a mathematical theory that roughly a decade after its development was picked up by physicists. It is now widely used in theoretical and condensed matter physics.

“I did not know any physics when we did that … and to that matter, I still don’t know that much physics, but who knew that that would apply beyond where it was supposed to go,” he said.

Simons then told the story of Oswald Avery, a Canadian-born American medical researcher.

Avery first graduated medical school to become a doctor, but a few years in decided that he would rather pursue medical research. He joined an institute that specialized in bacteriology, and seven years later took his career to the Rockefeller University Hospital.

Specializing in pathogenic bacteria, Avery became a great expert in the field and expanded his studies to the genetics of bacteria – a subject, Simons said, that at that time was “as mysterious as the genetics of anything else”.

“In a series of very delicate experiments, he determined that the material that determined inheritance – genetic material – was neither a protein, a lipid, or a carbohydrate,” said Simons.

He continued to narrow his samples down to a very miniscule amount, which presented as an acid – and indeed showed to be DNA.

“DNA was a molecule that was known since the late 1800s, but its use in biology was unknown,” said Simons.

Avery knew his results would be met with disbelief, so worked for four more years, repeating and perfecting his experiments, before publishing his findings in 1944.

“The paper was immediately recognized by many as being an extraordinary result, but it took several years for the remainder of the scientific community to be convinced,” said Simons. “Nine years later Crick and Watson discovered the structure of DNA and that unleashed evolution in science that’s lasted to this day.

“Avery could not possibly imagine how transformative and far-reaching his discovery would be, nor even a fraction of its ultimate components, applications; he just wanted to know the answer ‘What is this stuff?’ And, that is really basic science at its best.”

Avery, he said, exhibited characteristics that make a great scientist and leader: good judgement to recognize a truly important problem; the courage to take that problem on even in great difficulty; and the determination to stick with it.

“As you go out in the world, try to cultivate these characteristics,” said Simons. “They can take you a long way.”