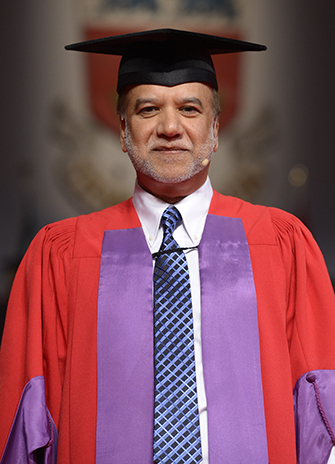 Business trailblazer Roger Mahabir recalled his journey from dishwasher to CEO for graduates of the Faculty of Liberal Arts & Professional Studies, during June 21 convocation ceremonies.

A former Atkinson student at York University, Mahabir was given an honorary doctorate of laws by York, recognizing his role as a Canadian innovator. He is chairman and CEO of cyber-security and risk management firm Tracker Networks, Inc., and president and CEO of Technology Innovations Inc. He shared with grads his secrets to success since he first arrived in Canada as an immigrant.

“There’s no magic to success, but with endurance and perseverance, success is magical,” Mahabir said.  “It wasn’t about following my passion; it was about following the opportunities and being passionate about whatever I did.”

Mahabir’s journey in Canada began after he emigrated with his family from Trinidad in the late 1960s. He started working right away to help support his family, he said, and at age 16 with 25 cents in his pocket, he hopped on a streetcar to Bay Street — his first time on a streetcar — and found a job cleaning toilets, delivering food and washing pots at a restaurant. Mahabir credits on-the-job training and volunteering to do tasks outside his job description, which he jokingly referred to as “sucking up,” for preparing him for the next opportunity.

The next year, he came across an insurance company hiring trainees for its computer department. Not only did Mahabir convince the boss that he could do the job, he also bargained that if he ever fell short, the company’s computer room would have the cleanest floors. The company hired him full-time and he continued to juggle work and school while turning down a number of offers to party.

“Since I had to help support the family, failure was not an option. And I perhaps unconsciously felt this determination to be the best at whatever I was doing,” said Mahabir. “I became the best computer operator, system programmer and project manager at Bell, Manulife and Canada Trust. At least that’s what they told me.”

Mahabir imparted four key messages to grads in order to prosper on their own journeys. The good news, he said, is that they’ve already accomplished the first two.

The first message is to obtain a good grounding, which the graduates have already accomplished at York University, he said. “A lot of hard work, a lot of sacrifice, and I’m proud of you.”

Number two on the list, he added, is to be the best at whatever you choose to do.

Number three, he urged, is to avoid becoming a “dinosaur” by reinventing yourself and learning continuously.

“Re-invent yourself periodically by acquiring a variety of skills. Have an open mind to new ways of doing things. Be accountable, inquisitive and innovative by challenging the status quo,” Mahabir said. He cited technologies such as Airbnb, Uber and Amazon for changing our world. He also reminisced about re-inventing his skill set when he needed to learn about the energy sector as a head of IT for Suncor and making technology work in remote areas of New Brunswick, when he worked for General Electric.

“Change always seems slow to take root. Then suddenly the pace quickens and the flood gates open,” he said. “No segment of society is immune.”

Mahabir’s fourth key message is to “embrace diversity by celebrating difference,” he said. “Think globally and use this power to create new opportunities. Being respectful and tolerant of differences and beliefs makes you stronger and more successful.”

This is advice Mahabir follows in his social life. He is chair of a committee of elders at a large Christian church, where he invites imams, rabbis and others to speak. In these experiences, he said he finds commonality with the speakers and learns greatly.

“However, diverse thinking is not restricted to ethnicity or religion alone, but applies in business experiences as well,” he said. “I have been fortunate to work with a variety of people in many industries, in many countries around the world” and having “a broad and global perspective gives you more empathy and more of a competitive edge.”

Mahabir advised grads to mentor and be mentored. “Network, network, network,” he said. “Talk to many people, different people, and have an open mind. They will respond to you. I know that because of all the things I do, mentoring and assisting people gives me the most satisfaction.”

He went on to encourage York’s newest alumni to consider becoming the boss, which he said is one of the best ways to unleash their creative talents. Among his achievements as boss, Mahabir was Chairman and CEO of Assurent Secure Technologies, a global leader in software security, which he sold to Telus. Some of his technological achievements have been archived by the Smithsonian Institute. Also, he and his wife went on to build a house off the grid and create their own winery, KREW Estates, where he disproved people who told him French grapes could not grow.

His current venture Tracker Networks is growing globally and his team includes hardworking York alumni, he said. This proves “we can do world-class things right here in Toronto.”

For Mahabir, there is opportunity in change. He predicts a bright future for hardworking grads. He has even re-engineered his thinking to work with millennials, including ditching his suits for jeans and more comfortable clothing at the office.

“The youth today are quicker, less judgmental, more flexible and tolerant and many times smarter than I was at this age,” he told the audience of family and friends gathered to cheer on grads.

“Technology has levelled the playing field,” he said, adding that the next young innovator can come from Nigeria, Bangladesh or anywhere on earth. “By the time I finish my talk, some teenager would have invented five new apps.”

He reminded grads that they are competing among the best and brightest around the world and that all those who have achieved success worked hard on multiple jobs and projects, held people accountable — especially themselves — altered the status quo, added value and, along the way, helped others.

“Graduates, it’s an exciting time with a world of opportunities,” he told them in closing.  “Smart, young people like you and good technology will save the world. Go and do it for all of us.”