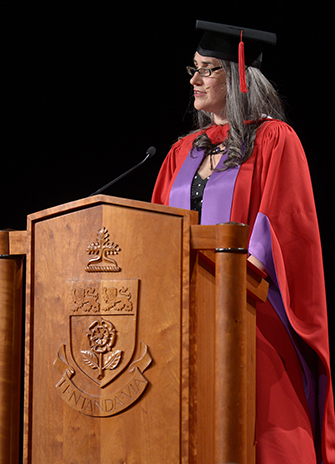 Making art is an act of courage and bravery said Canadian theatre director Jillian Keiley (BFA Spec. Hons. ’94) to graduates of the School of the Arts, Media, Performance & Design (AMPD) and the Faculty of Liberal Arts and Professional Studies. Keiley spoke to grads on June 21 during spring convocation ceremonies.

An alumna of York’s Theatre Program, Keiley was at York University to receive an honorary doctor of letters degree in recognition of her important role in Canadian culture and theatre.

In a stirring and spirited address, Keiley praised graduands, their parents and friends. “Seeing 600 new champions of art in front of you here today might make you think there’s no way they’ll make it – they’ll starve, critics will attack them, I think she’s good but that’s my daughter, my opinion doesn’t count,” Keiley said. “Oh yes it does! You are the primary audience, our first audience and for many of us, the most important one. Don’t forget that.”

What the world needs now is not less art that more people will agree on, but instead, more art that serves the diverse backgrounds, tastes and souls of a multi-generational, multi-cultural, multi-aesthetic society, said Keiley.

“We need you, graduates, your unique take on things, and with that we will begin the work of serving diverse audiences who don’t necessarily share the taste and culture of art consumers past,” she said. “And we need to also continue to serve traditional art consumers. Parents and friends don’t worry – there is not some finite number of audience members in the world. As our expression of culture expands, so will the audiences who enjoy it.”

The new graduates are fortunate, said Keiley, as they can offer more variety, style, culture and opportunities for diverse art forms for more audiences. “A great mistake of our culture has been to rarify certain elements of class, society and art and suggest that this is the best audience experience for everybody. Doesn’t it always depend on the audience?”

She spoke about AMPD Professor Michael Greyeyes who has spoken about “decolonizing movement.” Greyeyes who is both a First Nations man and professionally trained ballet dancer is curious as to why the languid lines created in ballet are determined more “beautiful” than the muscular pulse of First Nations powwow dancing. “I propose the determination can only be decided by the real audience at that moment in time,” she said. “Each individual expression is made, not to be rated on a scale to the highest pinnacle but to be to be appreciated to be exactly what it is – an expression that individual audience members experience, some to their dissatisfaction some to their delight.”

When she began her remarks, Keiley read from a list of reviews of her work. The founder of Artistic Fraud of Newfoundland, she has directed and taught across Canada and has worked internationally. She is the artistic director of the National Arts Centre (NAC) English Theatre, a position she has held since 2012. Keiley received the prestigious Siminovitch Prize in Theatre (directing) in 2004 and the Canada Council’s John Hirsch Prize in 1997. Despite this acclaim, she’s experienced both positive and negative reviews of her work and is pragmatic about the accolades and the criticism.

“None of critics I quoted earlier were wrong in their interpretations of my recent productions, except, each should have offered the opening caveat – ‘for me.’  No one really has the authority to say a piece of art IS good or bad. It can only ever be in their opinion. The ‘for me’ is essential, and other individuals can decide if they align or not. ‘For me Jillian Keiley’s direction turns powerful story into mishmash.’  Fair enough. ‘For me this is the best Shakespeare.’ Fantastic, but again has everything in the world to do with you, an individual in  the audience, an entity which has not one head or heart but holds as many experiences and opinions as seats that are filled.”

“I learned so much from my teachers here  – but I learned just as much from my classmates as we figured things out together.  The biggest thing I learned is – you are only as good as the people around you,” said Keiley.  “My collaborators at Artistic Fraud in Newfoundland are the soul of the reason I’m lucky enough to be here in front of you today. At the National Arts Centre I am extremely lucky to work with people who educate and inspire me every single day.”

She urged parents and friends of the graduates to continue to support their daughters, sons and friends. “You heard the kind of comment and criticism artists can receive – you know that these brilliant young souls are bravely walking out into either a firing squad or a parade – and we can’t know which til the curtain goes down. Walk up to them at their opening, their book release or their launch and tell them that they are wonderful. You never have to add the prefix ‘for me’. It’s just simply, your work is wonderful.  You can just silently know the ‘for me’ part because it is, as always, for you.”