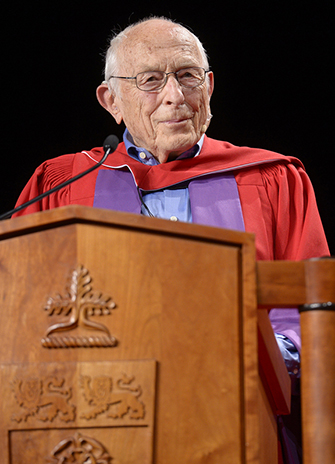 Small steps toward change have a cumulative effect, and if enough of us change our lives today, and keep on doing so, transformative change is the result.

This was the message shared with Faculty of Health and Faculty of Environmental Studies graduands during the second of 13 York University Spring Convocation ceremonies when John Friedmann addressed students and guests on June 17.

Friedmann is the recipient of an honorary degree of laws from York University, and is a highly respected writer and educator on the topic of sustainable development and planning.

“It has become common knowledge that the 21st century will be the historical moment when our planet Earth – the planet we inhabit and hope to continue to inhabit indefinitely – will  become completely urbanized, thus bringing to a close a process of full-on urbanization that began two centuries ago and is still ongoing,” he told graduates.

What this means, he told students graduating in environmental studies and nursing, is a growing pressure on the natural environment and the critical resources on which we depend.

“Though I am not at ease in my role as ‘Cassandra’ predicting the worst possible outcomes, I do believe that we would all be a great deal better off if we found ways to reduce humanity’s pressure on global resources and on the immediate environment in the places where we live,” he Friedmann, who is an honorary professor in the School of Community and Regional Planning at UBC, and continues as professor emeritus in the School of Public Affairs at UCLA .

The phrase he uses for the proverbial shrinking of the urban ecological footprint is ‘the de-materialization of urban life’ – a response to the 18th century interlude of ‘capitalist growth without limits’.

“We have reached a condition (ecologists) call ‘overshoot’, meaning that we are irrevocably destroying the very foundations on which we are dependent for our lives and livelihood,” he said. “Overshoot thus comes with a mandate: to consume less, or we are doomed.”

The ensuing question posed to graduates was how do we respond to this challenge?

Friedmann’s advice is to make a conscious decision to de-materialize.

“(O)pt out selectively – and I stress selectively – from the life the corporate world has designed for us,” he said. “I place my hope in the creativity of ordinary people to find ways that will lead to a meaningful, satisfying, and rich life beyond consumerism in a parallel economy based on the production of use values.”

A parallel economy could include: community gardening and urban farming; sharing in the economy – for example car and bike rentals; active transportation; cooperative projects such as food banks, park clean-ups and more; and community collaborations such as street festivals, community theatre groups and farmers’ markets.

Skeptics, he said, will attempt to debunk these efforts by saying they a small and insignificant steps.

Responding to this type of dismissal, he suggested, requires the mind-set that transformative changes comes through gradual change.

“The city gradually adapts to walking and biking, cars are electrified and shared, public transit no longer loses money, weekends are no longer spent gazing at the flickering screen, urban neighborhoods celebrate their local saints, people take over the streets for tai-chi or dancing, local craft fairs draw children and adults who come not only to enjoy but to practice their skills in plain view, second-hand markets pop up, local competitions sprout local heroes,” he said. “The city reinvents itself.”

But still at the heart of this change, he said, is the individual decision to make it.