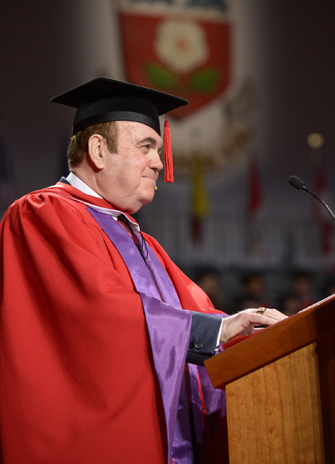 Appreciating the power of trust, staying true to one’s values and giving back to the community are all critical attributes displayed by those who succeed in the world, said York alumnus Victor Phillip Dahdaleh.

Dahdaleh was at York University on June 20 to receive an honorary doctor of laws degree in recognition of his support of education, research and global health.

In his convocation address to the graduands of the Faculty of Health, Dahdaleh spoke about how important it was to receive recognition from his alma mater. “It is a real pleasure and privilege to be with you today in this wonderful setting,” he said. “I am deeply honored to have received an honorary doctor of laws degree from York University today.”

He began his remarks by speaking about his time as an undergraduate student at York University. Back then, he wrote regularly to his parents to share his news and offer updates on his studies. He contrasted that form of communication with today’s use of smart phones and texting, noting that although much had changed, there were still many commonalities between the past and present. “When I was a student, a Trudeau was the prime minister and amazingly, many years later, a Trudeau is still prime minister,” he said.

Dahdaleh told grads there was no magic formula for success and urged them to do their very best day in and day out in order to make a difference in the world. He then spoke about the power of trust, friendships and long-term relationships. “Some of my most successful business ventures have started from just a relationship with a person that I trust, turning a good idea into real success,” he said.

“Try your best to be a good citizen, invest in people and most importantly, when you succeed, give something back and contribute your time, talent, and if you are able, your money and you will make a difference,” he said. “I had wonderful opportunities to do just that through philanthropy and volunteering. These things matter to me and I encourage you to find those things that matter to you.”

He asked graduands to remember their Canadian values and what they stand for. He spoke with pride about his pivotal role in creating a new institute for global health at York University. “The new institute has a great objective to become the world’s leading institution for education, research and innovative thinking in its field,” he said. “Preparing students to work in the far corners of the world is a noble vision, improving health and life expectancy in poorer countries is a moral imperative and the institute builds on the work that the Dahdaleh Foundation has been supporting over the last 30 years.

“True solutions require collaboration, we must learn together, we must share knowledge and not horde it. We must act in the spirit of generosity that has defined Canada and her citizens. This is the Canadian spirit. This is the York University way,” he said.

He encouraged the graduands to never give in or give up their focus. “Never give up on your dreams and ambitions,” he said. “I certainly haven’t and I never will. Looking at the class of 2016, I believe I am in good company. The future belongs to you.”

A Canadian business magnate based in the United Kingdom, Dahdaleh is an honorary fellow of the London School of Economics and a board trustee of the William J Clinton Foundation. From 2004 to 2009, he was the president of Canada-UK Chamber of Commerce and is a Fellow of the Duke of Edinburgh Award World Fellowship.