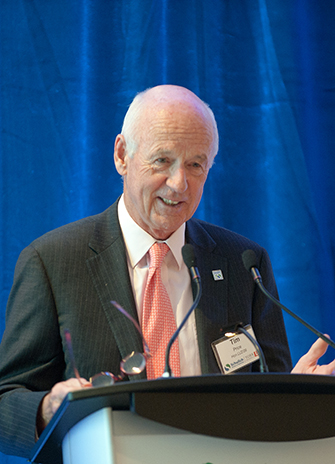 As part of its Leading Change initiative, the Schulich School of Business officially announced the establishment of the Brookfield Centre in Real Estate & Infrastructure made possible by a generous $4-million donation from Timothy Price (Hon LLD ’09) and his wife Frances Price, together with the Brookfield Partners Foundation.

Price is chairman of Brookfield Funds, a division of Brookfield Asset Management Inc. and leading asset manager with more than $200 billion worth of assets under management in property, renewable energy and infrastructure

Schulich’s Leading Change initiative is part of York’s most ambitious fundraising effort to date, Impact: The Campaign for York University. The campaign is more than halfway to its goal of $500 million in commitments to mobilize new ways of thinking, prepare engaged global citizens and build stronger communities.

During the announcement at St. Andrew’s Club in Toronto last Wednesday, it was also revealed that the Brookfield Centre in Real Estate & Infrastructure will be supported by sector- related programming and a new chair – the Timothy R. Price Chair in Real Estate & Infrastructure – to be established in honour of Price’s exceptional leadership and contributions to Canada’s thriving real estate industry.

The Brookfield Centre will become the hub of real estate and infrastructure industry outreach, alumni engagement, research, teaching excellence and experiential learning at the Schulich School of Business. The establishment of the Brookfield Centre will also provide funding for new professorships and executives-in-residence, while creating new scholarships and student awards.

Mamdouh Shoukri, president and vice-chancellor of York University, announced the $4-million gift and said: “On behalf of York University and all of our Schulich students, faculty and staff, I wish to thank Tim, Frances and the Brookfield Partners Foundation for this incredible contribution to our students and to the University’s bright future.”

Shoukri added that one of Schulich’s great strengths is “its strong ties to the business community, which is exemplified by its relationship with Tim and Brookfield.”

Schulich Dean Dezsö J. Horváth thanked the Price family and the Brookfield Partners Foundation for their strong support over the years.

“Schulich’s program in real estate and infrastructure is well established and highly regarded by industry,” he said. “But the funding provided today by Tim and Frances and by the Brookfield Partners Foundation will take our successful Real Estate & Infrastructure program to an even higher level.”

Price, who has a longstanding association with the Schulich School of Business and York University, also recognized the significance of the program.

“Real estate and infrastructure are a very significant part of ongoing economic growth in all nations, and leadership will continue to be highly valued in realizing the potential of large projects,” he said. “The Brookfield Centre has a golden chance to be in the vanguard of providing leaders in these fields – as Schulich has already realized in its program.”

In concluding his remarks, Price said: “I have been fortunate in my life to work with people like Peter Bronfman who are inspirational in their philanthropy. I have also been lucky to be able to give back to institutions that are making a difference in our community. Schulich has been an outstanding example of making a difference. Giving back provides leverage to our Institutions and gives them the greater ability to grow and flourish. The giving provides purpose in being able to direct a gift where it can be most beneficial in the hands of deserving people who will make great things happen.”

Schulich has offered an MBA specialization in real estate since 1991 and expanded the program in 2009 to include infrastructure to reflect growing international interest in addressing global infrastructure needs.