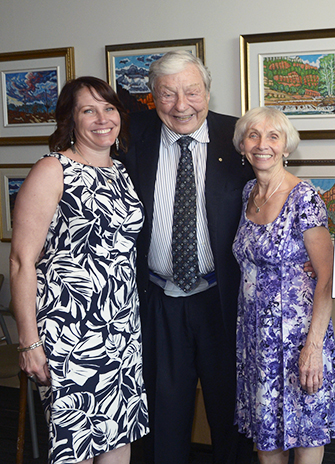 A generous donation from the private collection of the late York University honorary degree recipient Barbara Turnbull (LLD Hon ’12) will decorate the Kaneff Tower with a new depth of colour and meaning.

On June 2, York University acknowledged the gift of 16 original oil-on-canvas paintings from Turnbull’s private collection of art gifted to her by artist and York University Chancellor Emeritus R. Roy McMurtry.

McMurtry, Ontario’s former attorney general and chief justice of Ontario, served as York’s 12th chancellor from 2008 to 2014. A prolific artist in his own right, McMurtry often sketched with Group of Seven artist A.J. Casson, and painted a number of vibrant landscapes over the years.

McMurtry gave longtime friend Turnbull one of his paintings every year for 16 years, from 1998 to 2014.

That collection will now be displayed on the fifth floor lobby of the Kaneff Tower.

Also present for the ceremony were Nancy Viva Davis Halifax and Marc Wilchesky, who are among those who nominated Turnbull for her honorary degree from York.

“Today, we celebrate the tremendous impact that Barbara made, as well as the generous gift she chose to give back to our community,” said Shoukri. “I speak on behalf of the entire York community when I say what an honour it is to accept a gift that so perfectly represents two special individuals in this University’s history: Barbara Turnbull and Roy McMurtry.”

To pay tribute to both the donor and the artist, a commemorative plaque will be installed in the space.

“York University has been lucky to work and collaborate with inspiring figures such as Barbara and Roy throughout our history,” said Shoukri.

Goldberg, who shared a lengthy friendship with Turnbull and is a co-founder of her foundation, said the donation was a “team effort” that resulted over the years in Barbara assembling a rather significant collection of McMurtry paintings.

“This collection represents an embodiment of their enduring friendship and connection to each other and to York University,” he said.

Turnbull, who died at the age of 50 in May 2015, was an accomplished writer and reporter for the Toronto Star, and a fierce activist for social justice and disability rights. At the age of 18, she was rendered a quadriplegic after an armed robbery at the convenience store where she worked.

She was the founder of the Barbara Turnbull Foundation, which raises funds for Canadian neuroscience research with a specific focus on spinal cord injuries. Turnbull received an honorary doctorate of laws from the University of Toronto in 2007, and an honorary doctorate of laws from York University in 2012. She was also the recipient of the Queen Elizabeth II Diamond Jubilee Medal (2012) and was invested as a Member of the Order of Canada (2015).