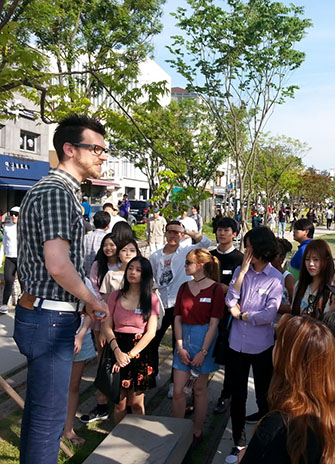 As part of their study abroad course on contemporary South Korean politics and social change, the students explored palaces, markets, fortresses, museums, workplaces, university campuses, neighbourhoods and other sites in the mega-metropolis of Seoul (population of 22 million). They were accompanied by York University political science Professor Thomas Klassen who teaches the course “South Korea: The Politics of Compressed Modernity”.

The course is one of 11 LA&PS summer study abroad courses that allow students to earn credits while spending part of this summer in Europe, Africa and Asia.

“The best part of this course was meeting and bonding with Korean university students from both Yonsei University and Kyung Hee University,” says York student Andy Jeong. “By interacting with Korean students, not only was I able to learn about life in Korea, but also share my life in Canada.”

Marianne Calinisan, another student, said “For me, the highlight of the course has been breaking out of my comfort zone, connecting with others and exchanging life stories. I’ve experienced and learned so much.”

“Many of my students at Kyung Hee University expressed a keen interest to meet students from a different country and culture,” said Sharzer. “They corresponded with the York students before meeting in person and had a great time touring the fast-changing Yeonnam and Itaewon neighborhoods. The two groups of students saw parts of the city they’d never visited before and made new friendships along the way.”

A high point of the course was a half-day visit to a Janssen Korea (part of Johnson & Johnson) pharmaceutical plant where students wore environmental suits to learn about the manufacturing processes for prescription and over-the-counter drugs. Students met with senior executives at the plant, toured the production floor, and ate lunch in the staff cafeteria.

“We at Janssen were delighted to contribute some of our knowledge and expertise to shaping the leaders of tomorrow,” said York alumna Sue Han (MBA ’08), the Janssen Korea finance manager who organized the event.

Another highlight of the course was a day-long tour of the 250 kilometres long demilitarized zone (DMZ) that separates North and South Korea. The DMZ is the last vestige of the Cold War and the most heavily fortified border in the world. The history of the DMZ was of particular interest to the students studying contemporary Korean history. Accompanied by U.S. and South Korea soldiers, students were permitted to briefly cross over the border to stand on North Korean soil.

This course was “an opportunity to experience Korean culture, history and politics first hand,” said student Fanny Fazekas. “We learned a lot through our field trips and by exploring Seoul together. It has been a great educational adventure that we will never forget.”

More photos of the students’ activities in Korea are posted on the course blog.