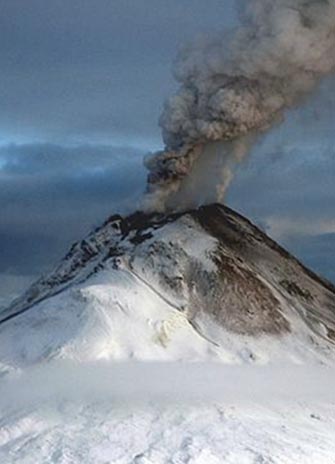 Image shows a volcano erupting the and gas plume

Professor Ulrich Platt of the Institute for Environmental Physics at the University of Heidelberg will give the 25th Annual Harold I. Schiff Lecture on Thursday, June 16 at York University’s Keele campus.

The lecture starts at 2:30pm and is organized by the York University Centre for Atmospheric Chemistry and the Faculty of Science. In his lecture titled, “Quantification of Volcanic Gas Emission by Optical Spectroscopy − How and Why”, Platt will present an overview of new techniques to measure volcanic gas emissions. The Harold I. Schiff Lecture is free and open to the public. All are welcome.

Volcanoes play an enormous role in the Earth’s system and atmosphere due to the scale and nature of their physical force. Volcanic gas emissions are often studied and not just out of scientific curiosity, they have a significant influence on the composition of the atmosphere. Volcanic gases are also a window into the processes occurring in the Earth’s interior. The forecasting of volcanic eruptions can be improved by measuring the variations in the gas emissions ratio between known gases such as carbon dioxide and sulphur dioxide.

In recent years, spectroscopic quantification of gas emissions from volcanoes and other sources has made enormous progress. In particular, passive spectroscopic approaches observing volcanic gases based on their observation of scattered sunlight in the Ultraviolet (UV) spectral range has evolved from an art to more refined techniques.

UV spectrometers are used by the Network for Volcanic and Atmospheric Composition Change, which for about a decade has routinely monitored more than two dozen volcanoes by fully automated installations, said Platt, noting that thermal emission spectroscopy is becoming important for case studies. A drawback of techniques that rely on solar radiation is the limitation on observations to daylight. Novel techniques such as the bi-static Light Emitting Diode Detection and Ranging (LIDAR) System promises to make range resolved measurements of emission plumes from volcanoes.

The Harold I. Schiff Lecture series was established in honour of late Professor Emeritus Harold I. Schiff, who was York’s founding dean of the Faculty of Science in 1968. Among his numerous achievements are his major contributions to the development of techniques for measuring trace constituents in the upper atmosphere and to the interpretation of the physics and chemistry of the stratosphere.

An educator and scientist in the field of chemistry, Schiff began at York in 1964 and was named a member of York’s Founders Society in honour of his contributions to the early development of the University. While at York, Schiff was chair of the Department of Chemistry and director of the Natural Science Program in 1964, dean of the Faculty of Science from 1965 to 1972 and director of the Centre for Atmospheric Chemistry from 1985 to 1989.

The Annual Harold I. Schiff Lecture is organized by the Centre for Atmospheric Chemistry at York. For more information, e-mail cac@yorku.ca.