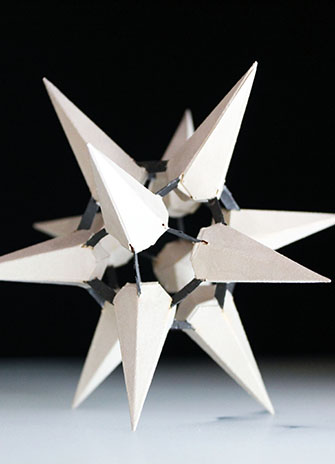 A York University professor will donate a collection of geometric models once belonging to esteemed geometer Donald Coxeter to the Canada Science & Technology Museum on behalf of York’s Department of Mathematics and Statistics.

York U Professor Asia Ivić Weiss was Coxeter’s last PhD student and was given authority over the models, which were donated to the department in 1990. Coxeter died in 2003 at the age of 96, and left part of his collection to the Department of Mathematics and Statistics, with other pieces going to Weiss, and the University of Toronto where he worked as a professor for 60 years.

Weiss, who has the objects on display in her office and in the Department of Mathematics & Statistics lounge, says she decided to donate the objects in an attempt to preserve them.

Some of the models – which are constructed with paper or wood – are beginning to show signs of deterioration.

“The museum will have the right conditions for storing the models, and will hopefully be able to restore the ones that need it,” said Weiss.

Part of the collection is a coveted 24-piece set made by H.T. Flather as part of the the 59 icosahedra. Flather, and Englishman, made the models out of paper, and paper and wire, in the 1930s.

“During the war, Flather wrote to Coxeter and asked if he could ship his models to him for safe keeping,” said Weiss.

When the war ended, Flather offered for Coxeter to keep the models, which were part of an incomplete set (he made 24 of the 59 icosahedra). Flather eventually made another complete set, which are now preserved at Cambridge University in England.

Weiss will also donate other models from Coxeter’s collection that were given to him over the years, as well as some of Coxeter’s personal items including a painting his mother did, his original dissertation, books, geometric drawings on paper, and a wooden sculpture by artist John Robinson.

In total, Weiss will donate approximately 50 pieces to the museum, which will include them in its permanent collection. The facility is currently closed and undergoing renovations, and is expecting to open with this collection on display in 2017.